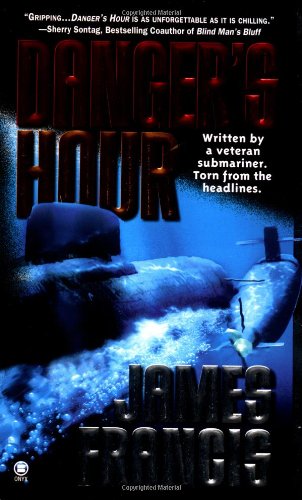 Crippled following a collision with another sub, the nuclear submarine U.S.S. Tulsa is left stranded on the ocean floor, with its crew trapped, oxygen running out, power systems failing, and Commander Geoff Richter struggling to save his crew. Original.

Dr James Francis has had a distinguished career spanning almost twenty years in the Royal Navy, during which time he served in the Falklands war, spent five years in the USA researching decompression sickness at the Naval Medical Research Institute, attained the rank of Surgeon Commander, and served as Head of Undersea Medicine at the Institute of Naval Medicine. In 1996 he left the Royal Navy and was invited to work for the US Navy on their submarine rescue and escape project. He has published over 100 scientific articles, reports and book chapters, mainly on diving medicine. DANGER'S HOUR is his first work of fiction.

From the disruptive and temperamental weather patterns that hampered rescue attempts to the callous and misleading journalists who were scrambling for the story of the year, many of the events in this evocative thriller eerily reflect situations similar to those of the 2000 sinking of the RFS Kursk, which ex-submariner and first-time author Francis notes occurred well after the writing of this novel. Refreshingly, this book goes beyond the typical military-novel parlance and digs into the lives of its characters. When the USS Tulsa is struck by a Russian sub, sending her to the floor of the Norwegian Sea, Commander Geoff Richter must maintain order and ensure the survival of his crew. As the crewmembers draw nearer to death with every breath, Francis takes readers into their heads and hearts via intimate flashbacks. Throughout the novel, for example, Richter recalls a past love, which allows Francis to craft a tasteful, even cute, love scene. In contrast, the few female characters here are shallowly portrayed, and their dialogue is gratuitous. A plethora of military personnel from several countries and an excess of acronyms may turn off readers who prefer less technical fiction, but an 80-entry glossary is a considerable help.
Copyright 2002 Cahners Business Information, Inc.