Items related to Atlantis and Other Places

Turtledove, Harry Atlantis and Other Places 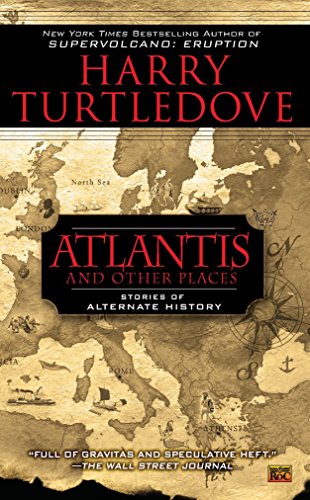 Harry Turtledove—the New York Times bestselling author of numerous alternate history novels, including The Guns of the South, How Few Remain, and the Worldwar quartet—has a Ph.D. in Byzantine history. Nominated numerous times for the Nebula Award, he has won the Hugo, Sidewise, and John Esthen Cook Awards. He lives with his wife and children in California.

Turtledove has long been established at the head of the alternate-history field. This short-story collection suggests that he can also thrust his tongue farther into his cheek than most authors can dream of. The first and last stories are laid in his new creation, the mid-Atlantic subcontinent of Atlantis. In one, John James Audubon sets out to capture on canvas the fast-disappearing birdlife; in the other, an eminent London detective and his doctor partner tackle the mystery of the Scarlet Band. In “Daimon,” the Greek general Alkibiades rises to the level of Alexander the Great, with unfortunate results for Socrates. “The Horse of Bronze” is a wild romp through classical Greece, while “Occupation Duty” explores another possible conqueror for Southwest Asia. “The Catcher in the Rhine” is a send-up that a certain cult novel has long deserved, while “News from the Front” savagely juxtaposes modern mediaocracy with WWII. And let’s not forget “Uncle Alf,” wholly spent inside the mind of an alternate Adolf Hitler (the Germans won WWI), and just plain scary. High Demand Backstory: Publisher promotion, plus his recognizable name, equals buzz. --Roland Green