Items related to The Civil War: A History

The Civil War: A History 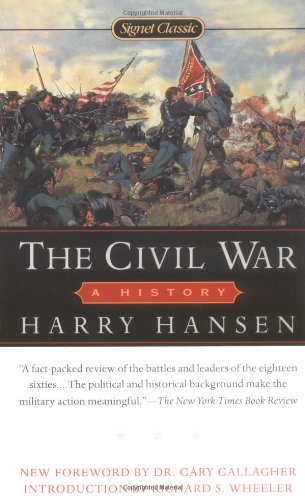 Provides a comprehensive overview of the Civil War from a variety of perspectives, describing the causes of the war, the battles and campaigns, the military leaders and politicians involved, the ideas and values that it exemplifies, and its long-term consequences.

Harry Hansen was born in Davenport, Iowa, and received a bachelor of philosophy degree from the University of Chicago. He served as a war correspondent for the Chicago Daily News during World War I, and was a correspondent at the Paris Peace Conference in 1919. Mr. Hansen served as literary editor of the Chicago Daily News, the New York World, and the New York World Telegram. He wrote eleven books as well as numerous articles and essays, and lectured at Columbia University and the University of Chicago. A member of the Society of American Historians, he was the editor of The World Almanac.
Richard Wheeler, an ex-marine, is the author of sixteen other books of military history, eleven of which deal with different Civil War campaigns and battles, including Voices of the Civil War, winner of the New York City Civil War Round Table's Fletcher Pratt Award. Wheeler is also the author of Voices of 1776: The Story of the American Revolution in the Words of Those Who Were There (Meridian). He lives in Pine Grove, Pennsylvania.

1. The Civil War: A History