Items related to The Bhagavad-Gita: The Song of God (Mentor)

Anonymous The Bhagavad-Gita: The Song of God (Mentor)

The Bhagavad-Gita: The Song of God (Mentor) 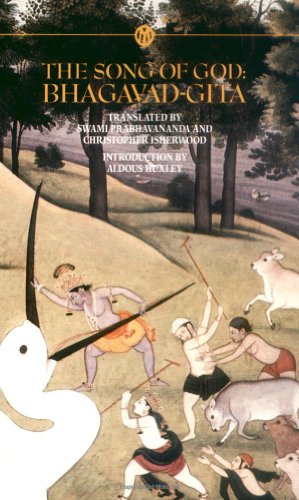 Uses the beauty of verse to express the highest truths of Vedanta. Includes an introduction to the Gita, and a study of non-violence versus the need to fight a just war.

The critics have singled out this translation:"The book is self-contained. A complete stranger to the Hindu Gospel can pick it up and in one or two evenings follow the poem from its terrific beginnings to its sublime end." -- New York Times

The story concerns the plight of Arjuna, the commander of an army who must fight a war. After seeing his friends and kinsmen on the opposing side, Arjuna tells his friend Krishna that he won't fight, even though it is his duty.

Krishna's reply deals not only with Arjuna's problem of whether or not to fight a just war but with questions that concern all of us:

How should we deal with our problems in a hostile world? Why is there misery? Why do we exist?

Krishna goes to the heard of these matters to help solve our most difficult problems. There is no one answer.

Swami Prabhavananda was the founder and head of the Vedanta Society of Southern California until his passing in 1976. He has written numerous books including his highly respected translation of the Yoga Sutras, How To Know God: the Yoga Aphorisms of Patanjali, and Shankara's Crest Jewel of Discrimination, and Spiritual Heritage of India

1. The Bhagavad-Gita: The Song of God (Mentor Series)

2. The Bhagavad-Gita: The Song of God (Mentor) Anonymous; Prabhavananda, Swami and Isherwood, Christopher