Items related to The Grass Is Singing

Lessing, Doris The Grass Is Singing

The Grass Is Singing 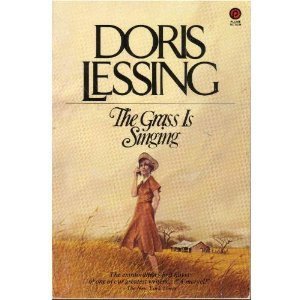 Set in South Africa under white rule, Doris Lessing's first novel is both a riveting chronicle of human disintegration and a beautifully understated social critique. Mary Turner is a self-confident, independent young woman who becomes the depressed, frustrated wife of an ineffectual, unsuccessful farmer. Little by little the ennui of years on the farm work their slow poison, and Mary's despair progresses until the fateful arrival of an enigmatic and virile black servant, Moses. Locked in anguish, Mary and Moses -- master and slave -- are trapped in a web of mounting attraction and repulsion. Their psychic tension explodes in an electrifying scene that ends this disturbing tale of racial strife in colonial South Africa.

The Grass Is Singing blends Lessing's imaginative vision with her own vividly remembered early childhood to recreate the quiet horror of a woman's struggle against a ruthless fate.

Winner of the 2007 Nobel Prize in Literature, Doris Lessing was one of the most celebrated and distinguished writers of our time, the recipient of a host of international awards. She wrote more than thirty books—among them the novels Martha Quest, The Golden Notebook, and The Fifth Child. She died in 2013.

1. The Grass is Singing

2. The Grass Is Singing

Book Description Plume, 1976. Condition: Good. A+ Customer service! Satisfaction Guaranteed! Book is in Used-Good condition. Pages and cover are clean and intact. Used items may not include supplementary materials such as CDs or access codes. May show signs of minor shelf wear and contain limited notes and highlighting. Seller Inventory # 0452254825-2-4

4. The Grass Is Singing