Items related to Zen and the Art of Fatherhood: Lessons from a Master...

Lewis, Steven Zen and the Art of Fatherhood: Lessons from a Master Dad

Zen and the Art of Fatherhood: Lessons from a Master Dad 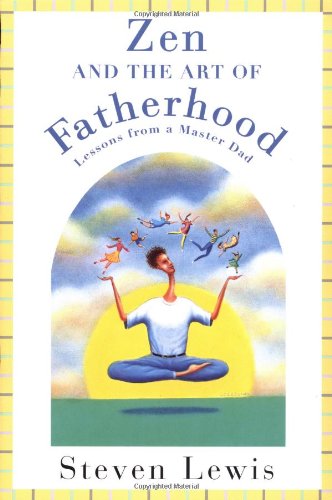 More than fifty quotes from Zen masters of all ages accompany and illustrate the author's account of raising seven children over nearly three decades, a personal journey of discovery and acceptance that has rendered moments of wisdom

Steven Lewis is the author of Zen and the Art of Fatherhood (Plume 1997). He who contributes columns and articles on family issues to national newspapers and magazines, including The New York Times, Los Angeles Times, and Parenting. A father of seven children and a grandfather of one, he is a professor of English and Literature at Empire State College in New Paltz, New York.

An ode to the contradictions of fatherhood, ``the perfect oxymoron,'' in the form of a collection of sometimes rueful, always loving essays and commentaries. Lewis (literature and Writing/Empire State College, New Paltz) and his wife, Patti, are the parents of seven children, ranging from Elizabeth Bayou-Grace, now 8 years old, to Cael Devin, 27. Lewis begins with reflections on his own father, his Brooklyn Jewish background, and tales of his courtship of Patti, a New Orleans ``patrician.'' Once their passion flared it never died, although it did move from ``X''-rated to ``G'' and back again during the course of Patti's pregnancies. Moreover, as the responsibilities of fatherhood have multiplied, says Lewis, ``my inner life has paradoxically become simpler and quieter.'' Zen- like paradoxes are explored in chapters covering such parental trials as being a Brownie troop leader, giving birthday parties, exercising discipline, and coping with teenagers (male and female). Also examined are more serious topics like birth, children leaving (or not leaving) home, and the challenge of caring for a child with congenital health problems, including a diagnosis of leukemia. The diagnosis, happily, was reversed and the child, Elizabeth, went on to tap dance after undergoing multiple hip surgeries. As well the stresses of parenting seven children (``How can they eat forty-six dollars worth of fruit in an afternoon?''), Lewis must face disapproval from friends and strangers on allowing himself to indulge in such a large family. ``More is less is more,'' is his Zen-like response. A good choice for fathers of even one child, with lessons in the yin of pride and the yang of humility--often arising at the same time, as any experienced father will attest. (Author tour) -- Copyright ©1996, Kirkus Associates, LP. All rights reserved.

1. Zen And The Art Of Fatherhood

Book Description Condition: New. Quality Books. Because We Care - Shipped from Canada. Usually ships within 1-2 business days. If you buy this book from us, we will donate a book to a local school. We donate 10,000+ books to local schools every year. If there are any problems, pleases ask us to resolve it amicably before leaving any feedback. Seller Inventory # R23222S

2. Zen And the art of Fatherhood

3. Zen and the Art of Fatherhood: Lessons from a Master Dad

4. Zen and the Art of Fatherhood: Lessons from a Master Dad Lewis, Steven