Items related to The Best Democracy Money Can Buy

The Best Democracy Money Can Buy 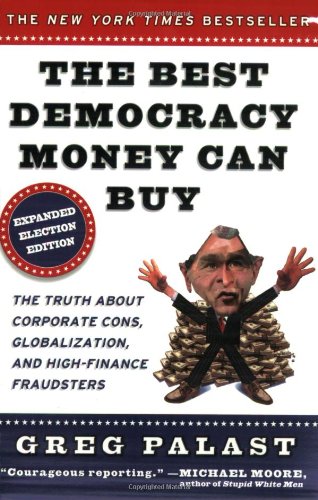 "Palast is astonishing, he gets the real evidence no one else has the guts to dig up." Vincent Bugliosi, author of None Dare Call it Treason and Helter Skelter

Award-winning investigative journalist Greg Palast digs deep to unearth the ugly facts that few reporters working anywhere in the world today have the courage or ability to cover. From East Timor to Waco, he has exposed some of the most egregious cases of political corruption, corporate fraud, and financial manipulation in the US and abroad. His uncanny investigative skills as well as his no-holds-barred style have made him an anathema among magnates on four continents and a living legend among his colleagues and his devoted readership.

This exciting collection, now revised and updated, brings together some of Palast's most powerful writing of the past decade. Included here are his celebrated Washington Post exposé on Jeb Bush and Katherine Harris's stealing of the presidential election in Florida, and recent stories on George W. Bush's payoffs to corporate cronies, the payola behind Hillary Clinton, and the faux energy crisis. Also included in this volume are new and previously unpublished material, television transcripts, photographs, and letters.

Greg Palast’s writings have appeared in The Washington Post, Harper’s, and The Nation. He’s been a guest on Politically Incorrect, C-Span’s Washington Journal, and does regular investigative reports for BBC Nightline.  Winner of Salon.com’s 2001 “Politics Story of the Year,” Greg Palast is a legend among his colleagues and his devoted readership worldwide. He divides his time between New York and London.

Those who prefer to see the world through rose-colored glasses will not enjoy this collection. It's the type of investigative journalism that mainstream media avoid for fear of censorship or accusations of libel. Is it true? The listener will have to decide. The presentation features an all-star cast of readers, renowned for their sympathy with liberal causes. The roll call includes Ed Asner, Al Franken, and Congresswoman Cynthia McKinney. They tell a story of international intrigue that reaches from the oil fields of Texas to the gold mines of Africa to the ballot boxes of Florida. This is political commentary that, unfortunately, may ring with truth. J.W. © AudioFile 2004, Portland, Maine-- Copyright © AudioFile, Portland, Maine

1. The Best Democracy Money Can Buy

2. The Best Democracy Money Can Buy

3. The Best Democracy Money Can Buy

4. THE BEST DEMOCRACY MONEY CAN BUY