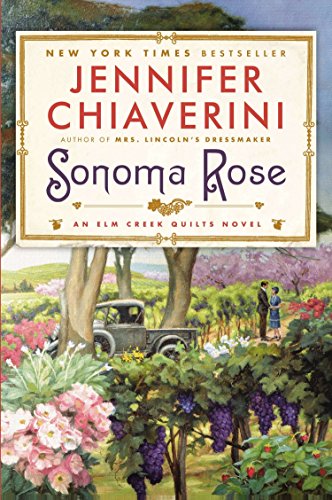 With the nation in the throes of Prohibition, Rosa Diaz Barclay unwittingly discovers that her husband, John, has given over the duties of their Southern California rye farm in favor of armed bootlegging. Fearing the safety of her four beloved children, Rosa flees, with little more than a suitcase filled with John’s ill-gotten gains and her heirloom quilts. Accompanying her is Lars, a good but flawed man who is the mother of two of her children. Under assumed names, Lars and Rosa hire on at a Sonoma County vineyard, seeking not only refuge from danger, but convalescence for two of the children, who suffer from a mysterious wasting disease. The devotion of the Italian-American community to the craft of viticulture inspires Rosa to acquire a vineyard of her own, even as she discovers firsthand its inherent hardships and dangers winemakers face in such turbulent times.

Jennifer Chiaverini is a graduate of the University of Notre Dame and the University of Chicago. She is the author of many books, most recently Mrs. Lincoln's Dressmaker. She lives with her husband and sons in Madison, Wisconsin.

"Chiaverini has an impressive ability to bring a time and place alive, showcasing the effects of Prohibition on farmers in Sonoma Valley."
— Romantic Times

"Chiaverini does an excellent job of describing the lush landscapes of California wine country, while simultaneously painting a touching portrait of the difficulties faced by farming families who must tend to one another, as well as the earth."
— Publishers Weekly

"Imparts a healthy dollop of history in a folksy style, while raising moral questions in a suspenseful narrative." —Publishers Weekly

"Warm and wise, full of quilting lore...One of the beauties of this series is that readers can start at the beginning or jump to the end. Each novel stands alone, while for devoted followers, each new volume is like a visit with old friends." —The South Cheatham Advocate (Kingston Springs, TN)

"A new generation of quilters embraces the craft with gusto...following the lead of author Jennifer Chiaverini." —Seattle Post Intelligencer