Items related to The World Is Curved Hidden Dangers to the Global Economy... 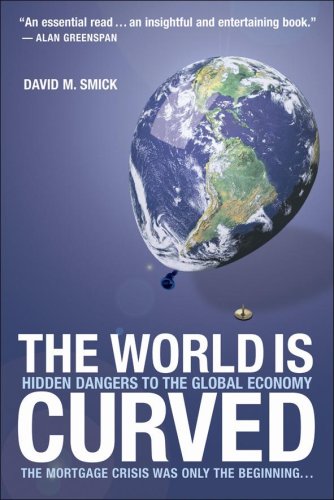 The World Is Curved Hidden Dangers to the Global Economy [Hardcover]

David M. Smick advises some of the world’s most successful money managers through his investment and strategic consulting firm, Johnson Smick International, Inc. He is also the founder, editor, and publisher of The International Economy, an acclaimed quarterly. He has served as an adviser to both Republican and Democratic presidential candidates and has written for such publications as The Wall Street Journal and The New York Times. Smick and his family live in Washington, D.C.

Jim Bond is a calm interpreter of this prescient analysis of how global economic forces will impact American life. With impressive phrasing, nuances, and energy variations, he makes this audio sound appealing without competing with the flow of ideas. He is one of the best voice pros we have for analytical writing like this. This terrifying book outlines the reasons for the 2007-2008 mortgage crisis and actually predicted with stunning clarity the October stock market meltdown. The articulate author, an international economist and presidential advisor, gives often-contrarian explanations of what suppresses creative capital allocation and how tax policy and class warfare force business overseas. His practical language and logical organization make these ideas accessible to a wide range of consumers, businesspeople, and policymakers. T.W. © AudioFile 2008, Portland, Maine

1. The World Is Curved: Hidden Dangers to the Global Economy

2. The World Is Curved Hidden Dangers to the Global Economy by David M Smick