Items related to Embracing The Stranger: Intermarriage And The Future...

Ellen Jaffe McClain Embracing The Stranger: Intermarriage And The Future Of The American Jewish Community

Embracing The Stranger: Intermarriage And The Future Of The American Jewish Community 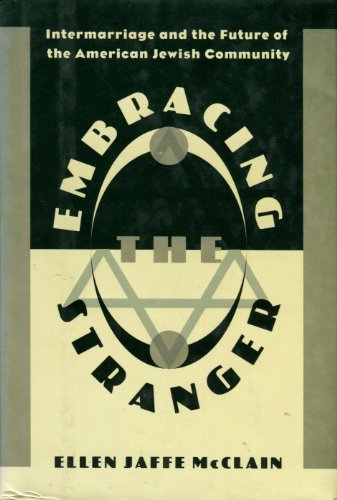 Does intermarriage necessarily spell the end of an individual's Jewish life - and the end of the Jewish community? Ellen Jaffe McClain, a deeply committed, temple-going, holiday-observing Jew who married a non-Jew, argues vehemently that it does not. Exploding a number of myths about intermarriage and the intermarried, McClain challenges the misuse of statistics to read all too many people out of Jewish life. She contends that recent changes in American society have the potential to make intermarriage less of a threat to American Jewry.
Who are the Jews who are intermarrying? And who are the non-Jews they are marrying? What factors other than assimilation are responsible for the rise of intermarriage? How can we help non-Jewish partners find a place in Jewish life? Embracing the Stranger combines hard data, anecdotes, and interviews with personal reminiscence and cultural commentary to produce an eye-opening account of why Jews intermarry and what concerned Jews - as a community and as individuals - ought to be doing about it.

Widely regarded as the scourge of the Jewish community, intermarriage between Jews and non-Jews has few outspoken defenders. McClain counters the attacks on these unions as she issues a thoughtful plea for welcoming outsiders to the faith and strives to destroy the stereotypes many Jewish men and women have of each other. McClain finds considerable flaws in the gloomy 1990 National Jewish Population Study, which predicts eventual assimilation of American Jews, and asserts it is too early to discern how couples married so recently are raising their children. Besides criticizing the finger-pointing of such studies, McClain examines why some Jews neglect the community and faults uninspiring mainstream Jewish institutions and Jewish self-hatred. Her call for embracing Judaism while respecting individual marital decisions is clear and direct: "Just as many Gentiles through the centuries have been comfortable vilifying Jews as evil-minded, money-grubbing parasites, so have Jews become comfortable stereotyping those of us who choose to marry non-Jews as self-hating, anti-religious destroyers of our people. It has to stop." Aaron Cohen

McClain, a junior high school teacher in Los Angeles who has previously written a novel for young adults, presents an engaging, easy-to-read book about intermarriage full of insightful interviews with intermarried couples and Jewish organization figures. The author also draws upon her own experience in being married to a non-Jew, which provided the impetus for the book. McClain believes that, although Jews marry outside the Jewish faith at a high rate, this can be beneficial for the future of Judaism in America. Her controversial opinion is not widely shared. Nevertheless, she believes there is a renewed vitality in outlook toward Judaism in many of these intermarried families and that these couples should be treated in a more welcoming manner by the Jewish community. McClain also offers advice and a directory of key Jewish organizations that can be of help to intermarried couples and their offspring. Recommended for medium and large public libraries serving a diverse clientele.?Paul M. Kaplan, Lake Villa Dist. Lib., Ill.
Copyright 1996 Reed Business Information, Inc.