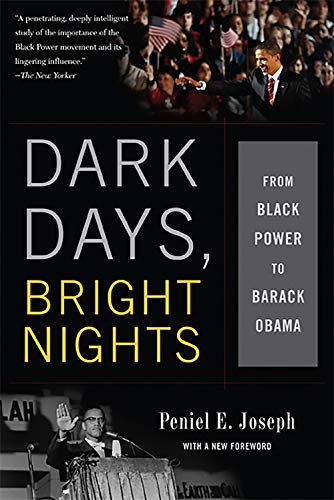 The Civil Rights Movement of the 1950s and ‘60s is now remembered as a distant, sepia-toned campaign, whose achievements and idealism were soon eclipsed by angry, confrontational Black Power activists. However, far from marking the end of an era, as is commonly thought, the 1965 Voting Rights Act wrested open a dam holding back radical political impulses. This political explosion initially took the form of the Black Power Movement, which, though conventionally adjudged a failure, in fact laid the groundwork for a crucial new wave of black leadership culminating in the inauguration of Barack Obama. In Dark Days, Bright Nights, acclaimed scholar Peniel E. Joseph elucidates Black Power's forgotten achievements by retelling the story of the movement through the lives of activists, intellectuals, and artists including Malcolm X, Stokely Carmichael, Amiri Baraka, and Barack Obama. In so doing, Joseph re-assesses a half-century fraught with struggle to expose the Black Power movement's resounding triumphs and continuing influence on American democracy.

About the Author:
Peniel E. Joseph is Professor of History at Tufts University and the author of the award-winning Waiting ‘Til the Midnight Hour, as well as editor of The Black Power Movementand Neighborhood Rebels. The recipient of fellowships from Harvard University's Charles Warren Center, the Woodrow Wilson International Center for Scholars, and the Ford Foundation, his essays have appeared in The New York Times, The Washington Post, The Journal of American History, The Chronicle Review, Bookforum, and The American Historical Review. He lives in Somerville, Massachusetts.
Review:
John Stauffer, Chair, History of American Civilization at Harvard and the author of Giants: The Parallel Lives of Frederick Douglass and Abraham Lincoln and The Black Hearts of Men
“Peniel Joseph, the preeminent scholar of African American culture in the postwar period, shows us in Dark Days, Bright Nights how and why Black Power transformed American culture and made possible the election of Barack Obama. Brilliantly conceived and elegantly written, it highlights the possibilities and limits of remaking society and achieving democracy. It thus is a vital, necessary book, one that every American should read.”

Henry Louis Gates, Jr., Alphonse Fletcher University Professor at Harvard University
“Scholarship on the Civil Rights Movement often takes a holistic approach to the era, submerging individual moments in the successes or failures of the movement as a whole. But Peniel Joseph wisely isolates the Voting Rights Act of 1965 as a crucial moment for both the movement and American history—not as the crowning achievement of the movement to that point but as the starting point for the (previously unacknowledged) inroads made by black radicalism, which ultimately led to the historic Presidential election of 2008. Joseph tells the story of the moment and of the individuals who shaped it and were shaped by it with rare insight and vitality. This book adds luster to his stature as a rising star in the field of African American history.”

Publisher’s Weekly
“A much needed discussion of black power’s successes and its contributions to the civil rights movement... [Joseph] makes a persuasive and stimulating case for Obama’s election as a vindication for black power, and his book is a vivid and welcome recasting of the history—and the myriad interpretations—of the movement.”