Items related to Men of Tomorrow: Geeks, Gangsters, and the Birth of...

Jones, Gerard Men of Tomorrow: Geeks, Gangsters, and the Birth of the Comic Book

Men of Tomorrow: Geeks, Gangsters, and the Birth of the Comic Book 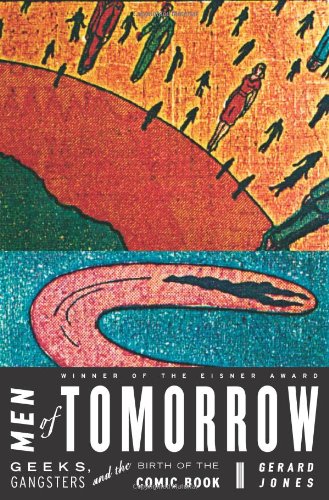 By the Eisner Award-winning author of The Comic Book Heroes, Killing Monsters, and scores of successful comic books and screenplays, Men of Tomorrow is the first book to tell the surprising story of the young Jewish misfits, hustlers and nerds who invented the superhero and the comic book industry. Among the characters in this vibrant panorama: ·      Jerry Siegel and Joe Shuster, the goofy myopic creators of Superman, who sold the rights to the Man of Tomorrow for $130 to...     Harry Donenfield, former pornographer and con-man, and his partner, Jack Liebowitz, founder of DC Comics, who went on to help build Steve Ross's legendary Warner Communications.      Batman's Bob Kane, who rose to fame and fortune in a career based entirely on lies and self-promotion.     Mort Weisinger, the ruthless editor of Superman, who suffered a nervous breakdown when he tried to be a superhero himself.      Plus Stan Lee, founder of a new kind of hero, including Spiderman, at Marvel Comics; Will Eisner, whose creation "The Spirit" has become a cult classic, and many, many more.     Springing unheralded out of working-class Jewish immigrant neighborhoods in the depths of the Depression, these young men transformed an odd mix of geekdom, science fiction, and outsider yearnings into blue-eyed chisel-nosed crime-fighters and adventurers who quickly captured the mainstream imagination. Within a few years their inventions were being read by 90% of American children and had spawned a new genre in movies, radio and TV that still dominates youth entertainment seventy years later. Drawing on exhaustive research, including interviews with friends and relatives of the creators, Jones reveals how the immigrant experience and the collision of Yiddish and American culture-forged in the crucible of two world wars-shaped the vision of the make-believe hero. He chronicles how the comics sparked a frightened counterattack that nearly destroyed the industry in the 1950's and how later they surged back at an underground level, to inspire a new generation to transmute those long-ago fantasies into art, literature, blockbuster movies and graphic novels. Animated by the stories of some of the last century's most charismatic and conniving artists, writers and businessmen, Men of Tomorrow brilliantly demonstrates how the creators of the superheroes gained their cultural power and established a crucial place in the modern imagination.

Gerard Jones is a writer whose credits include the New York Times, Harper's, Batman and Spider-Man comics, and Pokémon cartoons. Recently, he has developed the Art & Story Workshops for children and spoken on fantasy, aggression, and the media at institutions around the country. He is the author of Honey, I'm Home: Sitcoms Selling the American Dream and The Comic Book Heroes. He lives in San Francisco with his wife and son.

The comic book's early days have received heightened attention in the wake of Michael Chabon's Pulitzer Prize-winning novel, Kavalier and Clay, about the cutthroat businessmen and naive artists who then populated the industry. Although Jones' history limns dozens of the young writers and artists, most from working-class Jewish neighborhoods and many still teenaged, and the bosses who exploited them, its central figures are Jerry Siegel and Joe Shuster, who launched the superhero genre by creating Superman, only to sell the rights to the character for a pittance and spend decades in obscurity and near-poverty. Jones continues the story through the censorship that nearly destroyed the industry in the 1950s to the 1960s superhero revival that continues today. Jones' experience as a comic-book scripter, albeit decades after the period he chronicles, gives him the advantage over most previous writers on the comics milieu, and his vivid writing suits the subject. But it is his impressively thorough research that makes this one of the most valuable books on a distinctively American storytelling form. Gordon Flagg
Copyright © American Library Association. All rights reserved

1. Men of Tomorrow: Geeks, Gangsters, and the Birth of the Comic Book

2. Men of Tomorrow: Geeks, Gangsters, and the Birth of the Comic Book

3. Men of Tomorrow: Geeks, Gangsters, and the Birth of the Comic Book

4. Men of Tomorrow: Geeks, Gangsters, and the Birth of the Comic Book Jones, Gerard