Items related to Thieves in the Temple: The Christian Church and the...

MacDonald, G. Jeffrey Thieves in the Temple: The Christian Church and the Selling of the American Soul

Thieves in the Temple: The Christian Church and the Selling of the American Soul 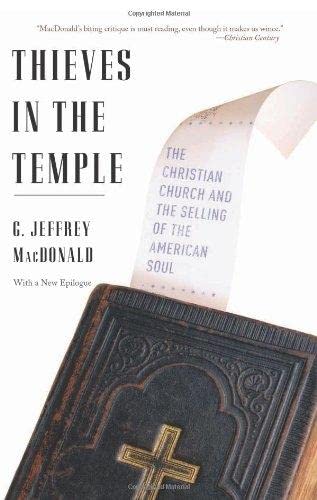 Though waves of cynics and atheists claim that America is too religious, G. Jeffrey MacDonald disagrees. America's churches, he argues, have abandoned their sacred role as dispensers of community values, and instead are increasingly serving up entertainment, aerobics, yoga classes, and other services that have nothing to do with religious faith. As religion becomes more consumer-oriented, congregants are able to avoid the moral, intellectual, and theological commitments Christianity requires by simply joining a different—and less rigorous—church. Grounded in journalism, personal experience, and Christian theology, Thieves in the Temple is an impassioned and provocative cri de coeur for a new religious reformation. Incisively critiquing today's dangerous movement away from true religion, MacDonald demonstrates just how much Americans stand to lose when churches sell their souls to recruit parishioners.

G. Jeffrey MacDonald is a journalist and an ordained minister in the United Church of Christ. A graduate of Yale Divinity School, he is a correspondent for the Christian Science Monitor and the Religion News Service. He writes regularly for Time Magazine on topics in business and business ethics. His work has also appeared in publications including Ms., The Washington Post, and the Los Angeles Times. He lives in Newburyport, Massachusetts.

Jean Bethke Elshtain, Laura Spelman Rockefeller Professor of Social and Political Ethics at the University of Chicago and author of Sovereignty: God, State, and Self
Jeffrey MacDonald's Thieves in the Temple is written with clarity and verve. He argues passionately that the wholesale embrace of a consumerist driven model of culture threatens the very soul' of the Christian churches, and he does so in a manner free from the spite and resentment that too often accompany such critiques. Thieves in the Temple deserves a wide readership.”

Dan Rather, Global Correspondent and Managing Editor of HDNet's Dan Rather Reports
"G. Jeffrey MacDonald writes with a journalist's eye and a preacher's heart. The crisis he identifies in this provocative and timely book has serious implications not only for America's religious life but also for our broader culture and politics."

Os Guinness, author of The Last Christian on Earth
Parts of the American church are beginning to resemble a modern Ship of Fools, and G. Jeffrey MacDonald has fired a timely shot across its bows. A penetrating and wide-ranging analysis of consumer religion, written with sorrow rather than anger, Thieves in the Temple is good reading for any interested observers but essential for pastors and lay people concerned for the integrity of the Christian faith in the modern world.”

Randall Balmer, Episcopal priest, Professor of American Religious History at Barnard College, Columbia University, and author of Thy Kingdom Come: How the Religious Right Distorts the Faith and Threatens America
With deft analysis and uncommon wisdom, Jeffrey MacDonald has produced a devastating critique of the cult of consumerism and easy affirmation that has corrupted American Protestantism in recent years. Protestants, the author argues in this compelling, prophetic, and ultimately hopeful book, have defaulted on their historic and culturally crucial task of moral formation. Thieves in the Temple is the finest, most perceptive book on Protestant life in America in a very long time.”

1. Thieves in the Temple: The Christian Church and the Selling of the American Soul MacDonald, G. Jeffrey