Items related to Race And Culture: A World View 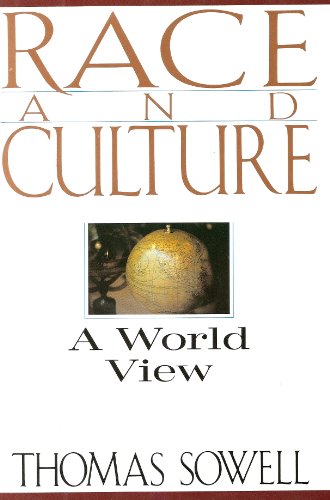 Encompassing more than a decade of research around the globe, this book shows that cultural capital has far more impact than politics, prejudice, or genetics on the social and economic fates of minorities, nations, and civilization.

Thomas Sowell is a senior fellow at the Hoover Institution at Stanford University.

For the better part of the last decade, Mr. Sowell's books on race, economics, and markets have constituted a rare repository of insights on some of the most pressing social-science concerns of our times. --Wall Street Journal

Sowell. . . draws on a worldwide range of examples and more than a decade of research in this intriguing exploration of the role of cultural attributes on group advancement. . . He tackles a host of issues: the costs and benefits of residential segregation; how affirmative action primarily helps better-off members of preferred groups; how prominent political leaders are not crucial to group success; how low-scoring groups on intelligence tests do their worst on abstract questions devoid of 'cultural bias.' --Publishers Weekly

Thomas Sowell is a unique national resource. Almost alone among academic economists, he fulfills the true calling of the intellectual, which is to explain the world so that we can know how to save what we cherish -- so that we have no excuse for ignorance. --Washington Times

One finishes reading this book awed with Sowell's capacity to bring together so much material in such a readable fashion. --Myron Weiner, Professor of Political Science, Massachusetts Institute of Technology

Thomas Sowell's views on race and culture must command the respect of any informed, unbiased person. . . The book is a tour de force that will set the standards on this important and complex subject for years to come. --Rondo Cameron, William Rand Kenan University Professor, Emory University

Thomas Sowell has produced a book that will compel every careful reader. . . to rethink their most confident views on matters of race and culture. . . the reader cannot help but find reasons to hope for a better world, culturally and racially, in this grimly realistic assessment. --National Review

Sowell has no match in his breadth of knowledge on these issues. . . Race and Culture is ultimately a cautionary tale of human history with broad implications for current public policies directed at racial and ethnic groups in the U.S. --Linda Chavez, John M. Olin Fellow, Manhattan Institute, and author of Out of the Barrio: Toward a New Politics of Hispanic Assimilation