Items related to The Unschooled Mind: How Children Think And How Schools...

Gardner, Howard E. The Unschooled Mind: How Children Think And How Schools Should Teach

The Unschooled Mind: How Children Think And How Schools Should Teach 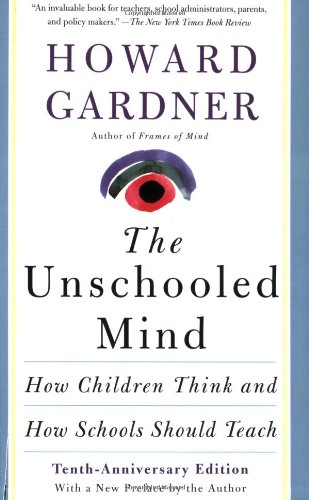 Merging cognitive science with educational agenda, Gardner shows how ill-suited our minds and natural patterns of learning are to current educational materials, practices, and institutions, and makes an eloquent case for restructuring our schools. This reissue includes a new introduction by the author.

Howard Gardner is the John H. and Elisabeth A. Hobbs Professor in Cognition and Education at the Harvard Graduate School of Education. Among numerous honors, Gardner received a MacArthur Prize Fellowship in 1981. In 1990, he was the first American to receive the University of Louisville's Grawemeyer Award in education. In 2000, he was awarded a Guggenheim Fellowship. He lives in Cambridge, Massachusetts.

A convincing call to reexamine the way children learn in their earliest years, and to make use of those new findings in classrooms. MacArthur fellow Gardner (Education/Harvard; To Open Minds, 1989, etc.) developed a theory that human beings learn and perform through multiple intelligences (seven, to be precise, from verbal to kinesthetic and interpersonal). His own and other studies in these areas revealed that students who may be letter-perfect in a school subject such as physics fail spectacularly in transferring that knowledge from classroom exercises to problems in the real world. Even adults abandon book learning and invoke pictures of the world--including stereotypes about the forces of gravity or about skin color--that they constructed as early as five years old. The emperor is exposed as being not only naked but ignorant. If such early childhood ``schema,'' as Piaget called them, are so tenacious, then harness them for learning in the advanced classroom, Gardner advises. He recommends reevaluating the concept of apprenticeships and using the hands-on, multimedia techniques seen in children's museum programs. The developmental theories of Piaget and Chomsky are respectfully challenged, the push to ``cultural literacy'' and ``back to basics'' less respectfully. At issue is the unexamined idea. Gardner calls for schools and teachers to encourage personal ``Christopherian confrontations,'' the encounter between belief and reality that Christopher Columbus presented when he did not sail off the edge of the world. An exciting proposal for restructuring schools in order to guide students to a genuine understanding of the world. A bonus is the extraordinary insight into why children and adults seem to resist learning and why they often behave in such mystifying ways. -- Copyright ©1991, Kirkus Associates, LP. All rights reserved.

1. The Unschooled Mind: How Children Think And How Schools Should Teach

2. The Unschooled Mind: How Children Think And How Schools Should Teach

3. The Unschooled Mind: How Children Think And How Schools Should Teach Gardner, Howard E.