Items related to It Takes a Pillage: Behind the bailouts,bonuses, and...

Prins, Nomi It Takes a Pillage: Behind the bailouts,bonuses, and backroom deals

It Takes a Pillage: Behind the bailouts,bonuses, and backroom deals 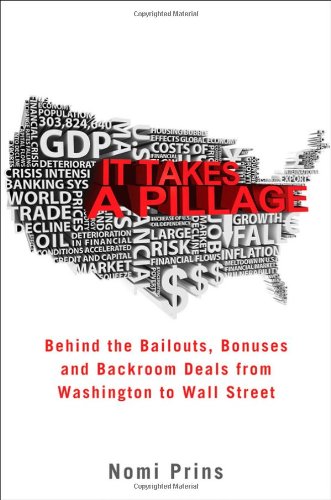 It Takes a Pillage: Behind the Bailouts, Bonuses, and Backroom Deals from Washington to Wall Street by Nomi Prins. John Wiley & Sons Inc.,2009

A former Wall Street manager turned muckraking journalist gets inside how the banks looted the Treasury, stole the bailout, and continued with business as usual

We've all watched as packs of former Big Finance leaders commandeer posts in Washington and lavish trillions in bailouts to "save" big Wall Street firms that will use that money for anything and everything except to fill in Main Street's potholes.

Former Wall Streeter Nomi Prins has been watching, too, and she isn't going to let them get away with it. She knows all about Big Finance and big money and moving numbers - and in this book she exposes the fundamental follies of our economic system and the schemes of the bigwigs who have no intention of letting it change. Prins:

If you've found yourself enraged and frustrated with how the bank bailout went bust for the American people, or how Wall Street continues to operate as if the rest of the world doesn’t matter, It Takes a Pillage gives voice to your outrage, and provides a deeper understanding of what we really have to be angry about and how we can fight for some real change.

The government has nearly convinced the public they have everything under control, when that’s far from the case. In fact, everything could go downhill fast. Here are ten all-too-likely scenarios I look at in my book, It Takes a Pillage:

1. The actual bailout has quietly ballooned to $16 trillion dollars (not including over $3 trillion set aside for money market funds), most of it given out with no strings attached. Wall Street firms could continue to tout the myth that ‘talent’ must be paid for – now with stupid sums of bonus money, funded by the American People.

2. The stock market, which has rallied substantially since the government started giving out free money to the banking industry, could tank on the realization that if that money needed to be paid back any time soon, the banks wouldn’t be good for it.

3. Because bigger is better still seems to be Fed policy, JPM Chase could acquire Bank of America – Merrill Lynch, creating one of the largest, federally subsidized banking firms in the world.

4. Because the bigger just can’t help getting badder, JPM Chase could also acquire Citigroup, and we’d be living with a monopoly economy.

5. We could sink into the delusion that the Obama administration has actually done something to restrain Wall Street, lulling us into a false sense of security. Then the remaining big banks will screw us again.

6. Congress could continue to ignore history and never reinstate the Glass-Steagall Act. That act made banks smaller, more specialized, easier to regulate and less expensive to bail out. Repealing it lead to this mess, and there’s barely a whisper heard in Washington of bringing it back.

7. As a Fed approved bank holding company, Goldman Sachs could buy a lot of small banks just to get access to all the money in savings and checking accounts to gamble with. Plus they’d have that great $250,000 FDIC guarantee they get per account. This would make them the biggest bank in the country.

8. Every bank and government agency with access to some aspect of a federal bailout could max out their subsidies chips at once – pushing the full bailout cost to over $26 trillion.

9. Many mid-sized and smaller banks didn’t need a bailout and have been better at allowing consumers access to credit. The largest banks, flush with federal funding and a poor record of helping average Americans, could buy them all up.

10. The Fed could continue to operate in secrecy, despite multiple moves by Congress to push for a full audit of its largesse. Right now, only the Fed knows what the real worst case scenarios might actually be.

Still ticked off at the Federal government doling out trillions to save Wall Street from its own screwups? You're not alone. You have every right to know exactly how the financial disasters of 2008 happened, why the government leapt so quickly to lavish the reckless perpetrators with cheap loans and subsidies that may never be repaid, and what must be done to ensure it never happens again.

In It Takes a Pillage, former Wall Street insider turned muckraking journalist Nomi Prins argues vehemently and convincingly that the current crisis has almost nothing to do with subprime mortgages and everything to do with a financial system that rewards people who move money instead of people who make things, operates outside of the media's gaze, is sheltered from governmental supervision, and uses leverage to turn risky deals into insanely risky deals.

You'll find out how the revolving door between Wall Street and Washington enabled and encouraged the disastrous behavior of large investment banks. You'll meet the Pillage People: the men who funneled trillions of dollars directly to the banks and the executives whose companies drained the American economy. You'll learn which of the Federal Pillage Triumvirate pirated the biggest part of a $10.7 trillion bounty—Hank Paulson, Ben Bernanke, or Timothy Geithner. You'll decide which private-sector pillager took the biggest share of spoils—Bank of America head Ken Lewis in his unholy alliance with former Merrill Lynch chief exec John Thain, who extracted $225 billion from the public; former AIG exec Joseph Cassano, who banked $315 million, leading the division that nearly drowned AIG before it hooked a $182 billion federal life raft; or Robert Rubin, whose public- and private-sector decisions decimated financial restraint and landed Citigroup in a $388 billion hole.

Prins also takes you on a harrowing tour of the Wall Street mind-set, in which making money is a game and colossal paychecks are a way of keeping score—and getting a huge bonus after churning out fabricated securities and taking out the entire world economy might be the biggest win of all.

The scariest part is that for all the trillions that have been spent or committed to the bloated stalwarts of Wall Street, our economic system remains in disarray. Prins demonstrates that this failure stems from flaws not in these institutions, but in the banking system itself. She shows how irresponsible deregulation whetted both individual and institutional appetites for short-term gain, and produced an addiction to greed and power that still rules the markets even after nearly destroying them.

Complete with a savvy and well-developed proposal for extracting ourselves from this downward financial spiral and stabilizing the economy, ItTakes a Pillage is packed with all the information you need to understand the financial crisis and identify policies that will solve the problem, rather than make it more severe.

1. It Takes a Pillage: Behind the bailouts,bonuses, and backroom deals

2. It Takes a Pillage: Behind the bailouts,bonuses, and backroom deals

3. It Takes a Pillage: Behind the bailouts,bonuses, and backroom deals

4. It Takes a Pillage: An Epic Tale of Power, Deceit, and Untold Trillions Prins, Nomi