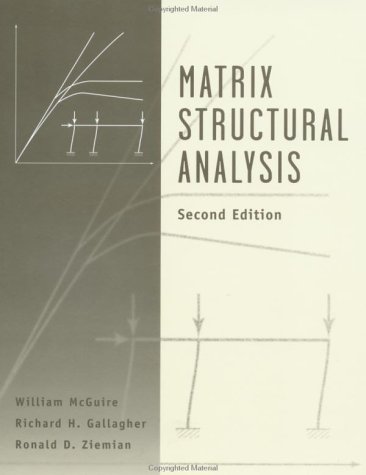 With the first edition being published over twenty years ago, the aim of this edition remains the same which is to place proper emphasis on the methods of matrix structural analysis used in current practice, and to provide the groundwork for forthcoming practice and allied, more advanced subject matter. This edition features new chapters on the nonlinear analysis of framed structures and treatment of the solution of nonlinear problems

Examines computerized structural analysis methods for buildings, bridges, and other structures, with special emphasis on current practices. Covers the stiffness analysis of frames, the flexibility method, virtual work principles, special analysis procedures, and more. Defines the terminology, coordinate systems, and fundamental concepts of structural behavior, laying the foundation for the study of more advanced treatments such as the finite element method.

WILLIAM MCGUIRE is Professor of Civil Engineering, Emeritus, Cornell University. He is the author of a well-known text and reference book, Steel Structures. He is a member of the National Academy of Engineering and among his awards are the T. R. Higgins Lectureship of the American Institute of Steel Construction and the Shortridge Hardesty Award of the American Society of Civil Engineers.

RICHARD H. GALLAGHER, PhD, Late President, Clarkson University, was a pioneer in the development of the finite element method. He was the author of Finite Element Analysis Fundamentals. He was a member of the National Academy of Engineering and the recipient of many awards, among them the ASME Medal, the highest honor of the American Society of Mechanical Engineers, and the American Society of Engineering Education?s Lamme Medal.

RONALD D. ZIEMIAN, PhD, is an Associate Professor of Civil and Environmental Engineering at Bucknell University. He is engaged in the development of computer software and active as a consulting structural engineer. He is the author of the structural theory section of the Structural Steel Designer?s Handbook. He is the joint recipient of the American Society of Civil Engineers? premier award, the Norman Medal, for a paper based on his doctoral research on the inelastic behavior of steel structures.