Items related to Physics Matters: An Introduction to Conceptual Physics 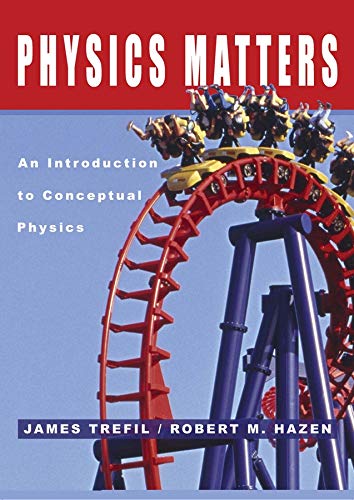 From amusement park rides to critical environmental issues such asenergy generation-physics affects almost every aspect of our world.In PHYSICS MATTERS, James Trefil and Robert Hazen examine thefundamental physics principles at work behind the many practicalapplications that fuel our society and individual lives. Their goalis to promote a deeper understanding of how the great ideas ofphysics connect to form a much larger understanding of the universein which we live.

Physics Is No Small Matter

From amusement park rides to critical environmental issues suchas energy generation-physics affects almost every aspect of ourworld. In PHYSICS MATTERS, James Trefil and Robert Hazen examinethe fundamental physics principles at work behind the manypractical applications that fuel our society and individual lives.Their goal is to promote a deeper understanding of how the greatideas of physics connect to form a much larger understanding of theuniverse in which we live.

James Trefil is the Clarence J. Robinson Professor ofPhysics at George Mason University. He has made contributions toresearch in elementary particle physics, fluid mechanics, medicalphysics (including cancer research), and the earth sciences and haswritten extensively about science for the general audience. He hasrecently completed a term as General Councilor of the AmericanPhysical Society and was awarded the prestigious Gemant Prize ofthe American Institute of Physics for his efforts to presentscience to the general public.

Robert M. Hazen is the Clarence J. Robinson Professor ofEarth Science at George Mason University and Staff Scientist at theCarnegie Institution of Washington Geophysical Laboratory. Heperforms research on materials at high pressure and is studying thehypothesis that life arose in a deep, high-pressure environment. Heis the author of more than 230 articles and 16 books on science,history, and music. A Fellow of the American Association for theAdvancement of Science, he has received numerous awards for hisscience writing.