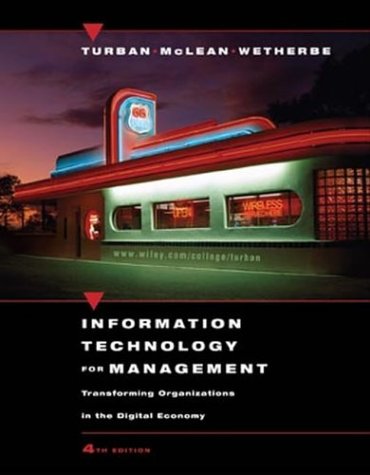 A practical, managerial-oriented approach that shows how IT is used in organizations to improve quality and productivity
Case studies highlight new technology and applications, including fuzzy logic, neural computing, and hypermedia
Contains a variety of cases that emphasize problems many corporations encounter
Features international cases, illustrating how IT can be adapted to other cultures

A unique focus on how organizations operate and compete in the digital economy!

Business today is transforming in amazing ways, and that’s what IT is all about!

The new Fourth Edition of Information Technology for Management uniquely focuses on how organizations operate and compete in the digital economy, and how IT can assist this transformation. No other text does a better job of putting you at the cutting edge of today’s digital world!

The Fourth Edition includes the absolute latest coverage on technology, with an entire chapter devoted to wireless technology.

Real-world examples throughout show how concepts are applied by real companies of all varieties, from non-profit, to small businesses, to large corporations, highlighting the importance of IT to all business students.

A running case about a Virtual Company (The Wireless Café) is tied to the textbook and integrated within the chapters. This offers you a virtual experience working as an intern and enables you to apply he concepts you have studied in the text.

With Wiley’s Business Extra Select program, you can combine Information Technology for Management, Fourth Edition with journal articles, cases, and readings from sources such as INSEAD, Ivey and Harvard Business School Cases, Fortune, The Economist, The Wall Street Journal, and much more! For more information, go to www.wiley.com/college/bxs.

Dr. Efraim Turban obtained his MBA and Ph.D. degrees form the University of California, Berkeley. His industry experience includes eight years as an industrial engineer, three of which were spent at General Electric Transformers Plant in Oakland, California. He also has extensive consulting experience to small and large corporations as well as to governments. In his over thirty years of teaching, professor Turban has served as Chaired Professor at Nanyang Technological University in Singapore, and University of Science and Technology, in Hong Kong. He has also taught at UCLA; USC; Simon Fraser University; Lehigh University; California State University; Long Beach; and Florida International University.
Dr. Turban was a co-recipient of the 1984/85 National Management Science Award (Artificial Intelligence in Management),. In 1997 he received the Distinguished Faculty Scholarly and Creative Achievement Award at California State University, Long Beach.
Professor Turban is currently on the faculty of City University of Hong Kong, Department of Information Systems, Faculty of Business Administration. Professor Turban’s current major interest is electronic commerce, strategy, and implementation.

Dr. Ephraim McLean obtained his Bachelor of Mechanical Engineering degree from Cornell University in 1958. After brief service in the U.S. Army Ordinance Corps, he worked for Proctor & Gamble Co. for seven years, first in manufacturing management and later as a computer systems analyst. In 1965, he left P&G and entered the Sloan School of Management at the Massachusetts Institute of Technology, obtaining his master’s degree in 1967 and his doctorate in 1970.
While at MIT, he began an interest in application of computer technology to medicine, working on his dissertation at the Lahey Clinic in Boston. While there, he was instrumental in developing the Lahey Clinic Automated Medical History System. During the same period, he served as an instructor at MIT and also assisted in the preparation of the books The Impact of Computers on Management (MIT Press, 1967); The Impact of Computers on Collective Bargaining (MIT Press, 1969); and Computers in Knowledge-Based Fields (MIT Press, 1970).
Dr. McLean left MIT and joined the faculty of the Anderson Graduate School of Management at the University of California, Los Angeles (UCLA) in the winter of 1970. He was the founding Director of the Information Systems Research Program and the first Chairman of the Information Systems area, both within the Anderson Graduate School of Management. In fall 1987, he was named to the George E. Smith Eminent Scholar’s Chair at the College of Business Administration at Georgia State University in Atlanta, Georgia.

Dr. James C. Wetherbe is Stevenson Chair of Information technology at Texas Tech University as well as Professor of MIS at the University of Minnesota where he directed the MIS Research Center for 20 years. He is internationally known as a dynamic and entertaining speaker, author, and leading authority on the use of computers and information systems to improve organizational performance and competitiveness. He is particularly appreciated for his ability to explain complex technology in straightforward, practical terms that can be strategically applied by both executives and general management.
Dr. Wetherbe is the author of 18 highly regarded books and is quoted often in leading business and information systems journals. He has also authored over 200 articles, was ranked by InformationWEEK as one of the top dozen information technology consultants, and is the first recipient of the MIS Quarterly Distinguished Scholar Award. He has also served on the faculties of the University of Memphis, where he was FedEx Professor and Director of the Center for Cycle Time Research, and the University of Houston.
Dr. Wetherbe received his Ph.D. from Texas Tech Unviersity.

1. Information Technology for Management : Transforming Organizations in the Digital Economy

Book Description Wiley & Sons Australia, Limited, John, 2003. Hardcover. Condition: Good. 4th Edition. Shows some signs of wear, and may have some markings on the inside. Seller Inventory # 2350783-75

2. Information Technology for Management : Transforming Organizations in the Digital Economy

Book Description Wiley, 2004. Hardcover. Condition: Good. Connecting readers with great books since 1972. Used books may not include companion materials, some shelf wear, may contain highlighting/notes, may not include cdrom or access codes. Customer service is our top priority!. Seller Inventory # S_291922617

4. Information Technology for Management: Transforming Organizations in the Digital Economy