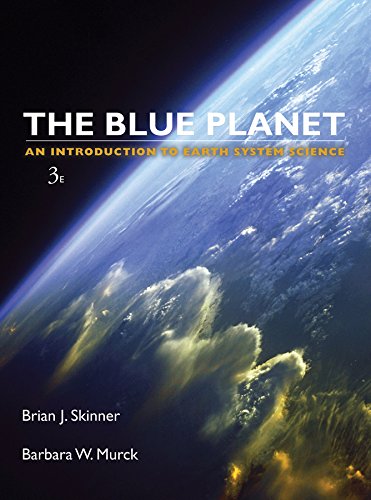 The Blue Planet: An Introduction to Earth System Sciences, 3rd Edition is an innovative text for the earth systems science course. It treats earth science from a systems perspective, now showing the five spheres and how they are interrelated. There are many photos and figures in the text to develop a strong understanding of the material presented. This along with the new media for instructors makes this a strong text for any earth systems science course.

Brian Skinner was born and raised in Australia, studied at the University of Adelaide in South Australia, worked in the mining industry in Tasmania, and in 1951 entered the Graduate School of Arts and Sciences, Harvard University, from which he obtained his Ph.D. in 1954. Following a period as a research scientist in the United States Geological Survey in Washington D.C., he joined the faculty at Yale in 1966, where he continues his teaching and research as the Eugene Higgins Professor of Geology and Geophysics. Brian Skinner has been president of the Geochemical Society, the Geological Society of America, and the Society of Economic Geologists, He holds an honorary Doctor of Science from Toronto University, and an honorary Doctor of Engineering from the Colorado School of Mines.

Barbara Murck is a geologist and senior lecturer in environmental science at the University of Toronto Mississauga. She completed her undergraduate degree in Geological and Geophysical Sciences at Princeton University and then spent two years in the Peace Corps in West Africa, before returning to Ph.D. studies at the University of Toronto. Her subsequent teaching and research has involved an interesting combination of geology, natural hazards, environmental science, and environmental issues in the developing world, primarily in Africa and Asia. She also carries out practical research on pedagogy. She is an award-winning lecturer who has co-authored a number of books, including several with Brian Skinner.

2. The Blue Planet: An Introduction to Earth System Science (Hardback)

6. The Blue Planet: An Introduction to Earth System Science

7. The Blue Planet: An Introduction to Earth System Science (Hardback)

Book Description John Wiley & Sons Inc, United States, 2011. Hardback. Condition: New. 3rd Edition. Language: English. Brand new Book. The Third Edition of Blue Planet: An Introduction to Earth System Science treats earth science from a systems perspective, showing how the four spheres (lithosphere, hydrosphere, atmosphere, biosphere) are interrelated. In this edition, significant emphasis is placed on cycling of materials and energy, and interactions among the spheres. The text also places much clearer emphasis on basic science, which can be seen in the reorganization of topics into Energy and Matter chapters, as well as a new "The Basics" feature in each chapter. This edition is also more systematic about documenting human impacts on the various spheres of the Earth system. Seller Inventory # ALB9780471236436