Items related to The Corsini Encyclopedia of Psychology and Behavioral...

The Corsini Encyclopedia of Psychology and Behavioral Science (4-Volume Set)

The Corsini Encyclopedia of Psychology and Behavioral Science (4-Volume Set) 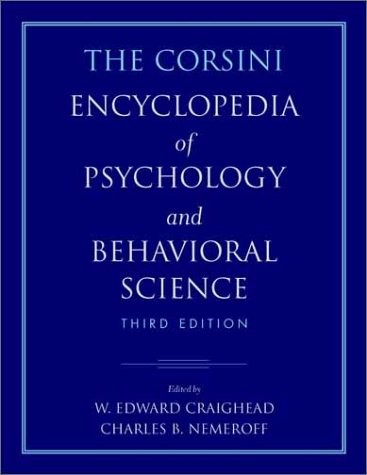 For more than twenty years, this indispensable resource has been the reference of choice for psychologists, researchers, teachers, and students who need up-to-date and comprehensive information in the fields of psychology and behavioral science. Updated and expanded to include much new material, this paperback is the only reference source that effectively blends psychology and behavioral science. This edition features over 1,200 entries, sixty percent of which are substantially revised or altogether new; contributions from over seven hundred experts from around the world; a bibliography of over 10,000 citations.

Previous editions of this reference for "the community at large" appeared in 1984 and 1994 (LJ 6/1/94), followed by a one-volume condensation (LJ 5/15/96). Editors Craighead and Nemeroff indicate that two-thirds of the prior edition has been updated and one-third replaced. Unfortunately, this seems exaggerated, and there are other editorial problems: biographical entries vary greatly in length, with mere paragraphs devoted to many of the more famous (such as William James or G.H. Mead) compared with whole pages for the editors and their contemporaries. The subject index is the table of contents placed at the end, while the author index is really a name index. Some 1000 contributors have produced 1200 articles, but the cross referencing varies in scope. References and suggested readings range from zero to (rarely) scores of items. Entries such as "Psychopharmacology" cite references no later than 1980. There is no entry on psychiatry at all, despite one on "Medical Model of Psychotherapy." There are also no entries for will, volition, agency, intentionality, E. Coue, Milton Erickson, James Gibson, Jacques Lacan, or Benjamin Rush. Article titles such as "Major Depressive Disorder" and "MAO Inhibitors" are not conducive to logical searching; sexual dysfunction is presented in two articles under "Male" and "Female." Finally, the level of presentation varies from homespun biography to material for the specialist. While acceptable, this work is greatly overshadowed by Oxford's excellent ten-volume Encyclopedia of Psychology (LJ 3/15/00) edited by Alan E. Kazdin. E. James Lieberman, George Washington Univ. Sch. of Medicine, Washington, DC
Copyright 2001 Reed Business Information, Inc.

"this edition of Corsini is an essential, solid, and important reference work in psychology and behavioral science. Recommended for academic and large public libraries." (M.M. Adams; Choice, June 2001).

"Any Library that has made heavy use of the second edition of this work will want to purchase the new edition. For New Buyers, the encyclopedia is recommended for large academic medical libraries." --Barbara Slater (Medical Reference Services Quarterly, Jan 01)

"have done a masterful job of keeping to the philosophy of Raymond Corsini: that the work must first of all be of immediate value and not become a museum piece. They have extensively re-edited the work, removing up to a third of the texts concerning moribund or outdated topics. They have updated about two-thirds of the prior edition and replaced the excised third with new topics. Under the editorship of Corsini, the encyclopedia has always championed an international flavor of topics and this tradition is carried on in this edition as an international array of scholars give their intelligence to this set. Perhaps what is most amazing is the restraint shown by the editors. This encyclopedia , resting on it's famous laurels, could have easily become a bloated and turgid exercise in grandiose exposition. However it instead emphasizes a Spartan utility and keeps its articles tightly written, succinct summaries. This work is strongly recommended even for libraries possessing the earlier editions." (Libraries Unlimited, Annual 2002)

Book Description Wiley & Sons, Incorporated, John, 2000. Condition: Good. 3rd Edition. Former Library book. Shows some signs of wear, and may have some markings on the inside. Seller Inventory # GRP30254956

2. The Corsini Encyclopedia of Psychology and Behavioral Science (4-Volume Set)