Items related to Elizabeth & Georgiana: The Duke of Devonshire and...

Chapman, Caroline Elizabeth & Georgiana: The Duke of Devonshire and His Two Duchesses

Elizabeth & Georgiana: The Duke of Devonshire and His Two Duchesses 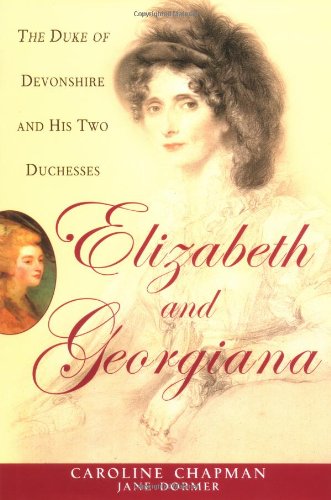 "A tale well worth telling . . ."
–Antonia Fraser, author of Marie Antoinette: The Journey

"Oh, may I see my beloved friends again, for they are dearer still to me than all else in the world!—She is the kindest, dearest, best most beloved of friends—and he is and must be ever the very soul of my existence. I will cease to live in error with him, tho’ with shame and blushes I confess it, one moment passed in his arms, one instant pressed to his heart, effaces every sorrow, every fear, every thought but him."
–From the journals of Lady Elizabeth Foster as quoted in Elizabeth & Georgiana

She was a lonely young woman of noble birth, condemned to a life of poverty and disgrace. They were one of the wealthiest and most glamorous couples in England. When they appeared on her doorstep one day and whisked her into the dazzling and glittering world at the very pinnacle of the British upper class, how could she not fall in love?

Elizabeth & Georgiana tells the poignant and provocative true story of what may be the most remarkable and enduring love triangle in history. Drawing on hundreds of previously unpublished letters and thousands of journal entries written by Lady Elizabeth Foster, this intriguing journey to the heart of passion will shock you, delight you, and challenge your beliefs about friendship, loyalty, and the true nature of love.

It was one of history’s strangest and most remarkable love triangles. For twenty-five years, Lady Elizabeth Foster was the intimate friend of Georgiana Cavendish, Duchess of Devonshire; for most of that time, she was also the mistress of the Duke, Georgiana’s husband. Was Bess, as she was known, the scheming mistress, false friend, and relentless social climber portrayed in previous accounts of her life, including the bestselling Georgiana: Duchess of Devonshire? Or was she a devoted and beloved partner to both the Duke and the Duchess?

In Elizabeth & Georgiana, noted editor and writer Caroline Chapman contends that Bess was an intelligent woman of deep feeling who coped courageously with a series of personal and political crises. Drawing on hundreds of previously unpublished letters and the 128 journals in which Bess recorded her most private thoughts and observations, this moving biography reveals a complex and perceptive woman who strove to be a true friend to Georgiana, a passionate lover to the Duke, and a dependable ally to both.

You’ll follow Bess from her privileged, upper-class childhood, through her disastrous arranged marriage to the abusive and tyrannical John Foster, and into the life of poverty and disgrace that followed her "private separation" from Foster. You’ll witness the fateful surprise visit paid to Bess and her sister by the Duke and Duchess of Devonshire and the growing infatuation she felt for both the dashing William and the glamorous Georgiana.

The relationship that ensued would put even the most imaginative romance novelist to shame: Bess and Georgiana in a deep, almost feverish, friendship; the Duke and Duchess struggling to hold their marriage together; Bess secretly bearing two illegitimate children by the Duke as gossips hissed and hinted of scandal.

Set amid the whirling events of the Regency Crisis, the French Revolution, and the Napoleonic wars, Elizabeth and Georgiana whisks you from stately country manors to palatial London residences, from the glittering social life of the cream of British society to grand tours of Europe in the highest of style. This poignant and provocative true story combines the intimacy of a whispered confession with the sweep and grandeur of a Hollywood epic. Shocking, surprising, and ultimately uplifting, it will challenge your beliefs about friendship, loyalty, and the true nature of love.

CAROLINE CHAPMAN was a picture researcher for twenty years before becoming an editor and a writer. Before writing this biography, she coedited Lady Elizabeth Foster’s journals. Chapman lives in England.
JANE DORMER is the great-great-granddaughter of Elizabeth’s second child by the Duke of Devonshire. She is the owner of the Dormer Archives and has helped both transcribe and

1. Elizabeth & Georgiana: The Duke of Devonshire and His Two Duchesses

3. Elizabeth & Georgiana: The Duke of Devonshire and His Two Duchesses Chapman, Caroline