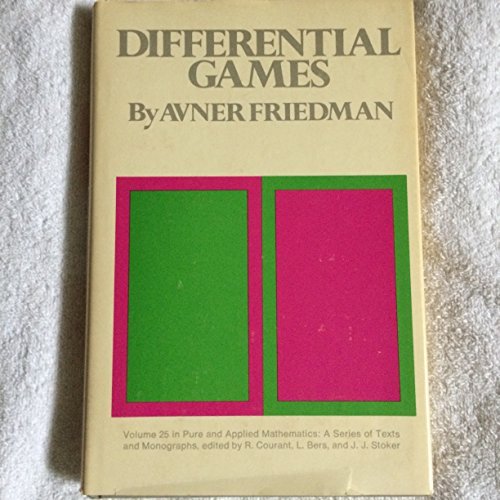 This volume lays the mathematical foundations for the theory of differential games, developing a rigorous mathematical framework with existence theorems. It begins with a precise definition of a differential game and advances to considerations of games of fixed duration, games of pursuit and evasion, the computation of saddle points, games of survival, and games with restricted phase coordinates. Final chapters cover selected topics (including capturability and games with delayed information) and N-person games.
Geared toward graduate students, Differential Games will be of particular interest to professionals in the fields of electrical engineering, industrial engineering, economics, and mathematics. Although intended primarily for self-study, it can be used as a core or ancillary text in courses in differential games, game theory, and control theory.

Baltazar Aguda is currently associate professor of Genetics & Genomics at the Boston University
School of Medicine. He holds joint appointments in Biomedical Engineering, in the Bioinformatics
& Systems Biology program at Boston University, and a membership in the Center for Biodynamics
in the same university. Recently, he was appointed member of the National Science
Foundation's (NSF, USA) research proposal review panel in molecular & cellular biosciences
(2004-7). He was a visiting faculty at the Mathematical Biosciences Institute at Ohio State University
(2003), at the Weizmann Institute of Science in Israel (2000), and a visiting associate at
the California Institute of Technology (2000-2001). Dr. Aguda obtained his PhD in Chemistry
(Chemical Physics Program) from the University of Alberta in Canada (1986), and was a tenured
faculty member of the Department of Chemistry & Biochemistry at Laurentian University in
Canada (1994-2002) before moving to Boston. Avner Friedman is a Distinguished Professor of Mathematics and Physical Sciences at
the Ohio State University, where he also serves as the Director of the Mathematical Biosciences
Institute. He received his Ph.D. degree in 1956 from the Hebrew University.
He was Professor of Mathematics at Northwestern University (1962-1985), and a Duncan
Distinguished Professor of Mathematics at Purdue University (1985-1987).

Book Description John Wiley & Sons Inc, 1971. Condition: Good. n. Shows some signs of wear, and may have some markings on the inside. Seller Inventory # GRP2734642

Book Description Wiley & Sons, Incorporated, John. Hardcover. Condition: Good. A copy that has been read, but remains in clean condition. All pages are intact, and the cover is intact. The spine may show signs of wear. Pages can include limited notes and highlighting, and the copy can include previous owner inscriptions. An ex-library book and may have standard library stamps and/or stickers. The dust jacket is missing. At ThriftBooks, our motto is: Read More, Spend Less. Seller Inventory # G0471280496I3N11

Book Description Wiley-Interscience, 1971. Condition: Good. A+ Customer service! Satisfaction Guaranteed! Book is in Used-Good condition. Pages and cover are clean and intact. Used items may not include supplementary materials such as CDs or access codes. May show signs of minor shelf wear and contain limited notes and highlighting. Seller Inventory # 0471280496-2-4

5. Differential Games (Pure and Applied Mathematics: A Series of Texts and Monographs, Volume 25)

Book Description John Wiley & Sons Inc 1971-12, 1971. Hardcover. Condition: Good. Some shelfwear; dust cover is torn at the top but is taped. Some scratches and marks to both sides. Content clean and readable. Book. Seller Inventory # 116307-5

Shipping: US$ 15.56
From United Kingdom to U.S.A.
Destination, rates & speeds

Shipping: US$ 15.56
From United Kingdom to U.S.A.
Destination, rates & speeds