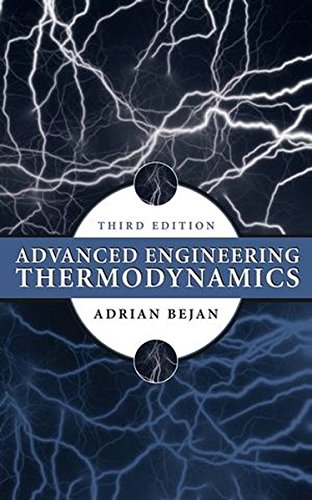 A brand-new, thought-provoking edition of the unmatched resource on engineering thermodynamics

Adrian Bejan's Advanced Engineering Thermodynamics established itself as the definitive volume on this challenging subject. Now, his Third Edition builds on the success of its trailblazing predecessors by providing state-of-the-art coverage in a slimmer, more convenient book.

Moving effortlessly among analysis, essay, and graphics, this streamlined edition of Adrian Bejan's powerful presentation will inspire future generations of researchers and students in all areas of engineering, physics, and life sciences. It features:
* An authoritative treatment of the first and second laws of thermodynamics and the constructal law of natural generation of flow configuration, with prominent focus on the history of the discipline and its main ideas
* Complete chapters on single-phase systems, multiphase systems, chemically reactive systems, exergy analysis, thermodynamic optimization, irreversible thermodynamics, and constructal theory
* Applications of thermodynamics to power generation, solar energy, refrigeration, air conditioning, thermofluid design, and constructal design
* The latest theoretical advances made based on the constructal law: atmospheric circulation and earth climate, animal design (flying, running, swimming), hierarchy and geography of human settlements, scaling laws of all river basins, flow fossils and Egyptian pyramids, and science as a constructal flow architecture
* A wealth of problems and worked-out examples
* Brilliant, original illustrations, plus hundreds of classic and contemporary references

Since its publication almost a decade ago, Adrian Bejan’s Advanced Engineering Thermodynamics has established itself as the definitive modern treatment of this challenging subject. Now the Second Edition brings this important work fully up to date with current analyses and practices, and explores uncharted territory along the promising frontier of contemporary research. Grounded in the axiomatic formulation and Gibbsian analytical structure of classical thermodynamics, this revised volume offers an incisive examination of the history, concepts, and language of thermodynamics. Readers will find a clear review of the first and second laws of thermodynamics, along with enhanced material on exergy analysis methods, entropy generation minimization, and related design applications. The Second Edition takes an in-depth look at the latest developments in the field in areas such as power generation, solar energy, low-temperature refrigeration, air conditioning, and thermal design. Bridging the gap between physics and biology, this book, for the first time, provides a fascinating introduction to the constructal theory of macroscopic organization in nature, extending thermodynamics into the realm of naturally organized systems. Geometric shape and structure are deduced from a single principle of thermodynamic optimization. Complete with original problems, worked-out examples, exceptional graphics, and hundreds of references throughout, Advanced Engineering Thermodynamics, Second Edition is the ideal cutting-edge reference for today’s professional engineers and researchers as well as a superb resource for advanced engineering students.

Adrian Bejan received his B.S. (1971, Honors Course), M.S. (1972, Honors Course), and Ph.D. (1975) degrees in mechanical engineering, all from the Massachusetts Institute of Technology. From 1976 until 1978 he was a Fellow of the Miller Institute for Basic Research in Science, at the University of California, Berkeley.
Adrian Bejan joined the faculty of the University of Colorado as an assistant professor in 1978 and was promoted to associate professor in 1981. Three years later he was appointed full professor with tenure at Duke University. He was awarded the J. A. Jones distinguished professorship in 1989.
Adrian Bejan has pioneered several original methods in thermal sciences and engineering: for example, entropy-generation minimization, scale analysis of convective heat and mass transfer, heatlines and masslines, designed porous media, the intersection of asymptotes method, and the optimal spacings of compact multiscale structures for maximum transport density. He formulated the constructal theory of design in nature in 1996.
Adrian Bejan is ranked among the 100 most-cited authors in all of engineering (all fields, all countries) by the Institute for Scientific Information (www.isihighlycited.com). He is the author of 20 books and 450 journal articles.
He has received 15 honorary doctorates from universities in 10 countries: for example, the Swiss Federal Institute of Technology (ETH Zürich) in 2003.
Professor Bejan has been honored by the American Society of Mechanical Engineers (ASME) with the Edward F. Obert Award (2004), Charles Russ Richards Memorial Award (2001), Worcester Reed Warner Medal (1996), Heat Transfer Memorial Award-Science (1994), James Harry Potter Gold Medal (1990), and the Gustus L. Larson Memorial Award (1988). In 1999, he received the Max Jakob Memorial Award from the ASME and the American Institute of Chemical Engineers. He was honored with the Ralph Coats Roe Award (2000) by the American Society for Engineering Education.