Items related to Principles of Anatomy and Physiology, Atlas and Registration...

Principles of Anatomy and Physiology, Atlas and Registration Card 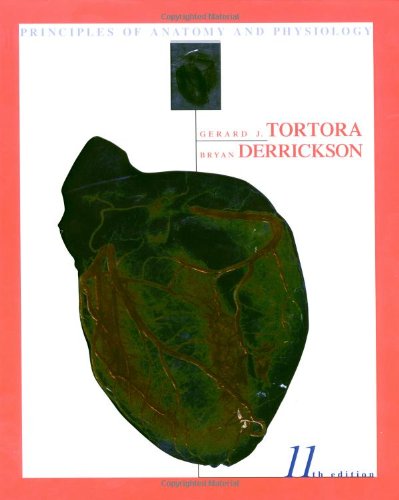 The eleventh edition of Principles of Anatomy and Physiology marks a new milestone in the publication of the phenomenally successful Principles of Anatomy and Physiology. Bryan Derrickson of Valencia Community College in Orlando, Florida joins Jerry Tortora as a co-author, bringing his background and expertise in physiology in balance with Jerry's focus on anatomy. The authors have maintained in the text the superb balance between structure and function and continue to emphasize the correlations between normal physiology and pathophysiology, normal anatomy and pathology, and homeostasis and homeostatic imbalances. The acclaimed illustration program is now even better thanks to the input of hundreds of professors and students and the re-development of many of the figures depicting the toughest topics for students to grasp. The eleventh edition now fully integrates this exceptional text with a host of innovative electronic media, setting the standard once again for a rewarding and successful classroom experience for both students and instructors.

Gerard J. Tortora is Professor of Biology and former Coordinator at Bergen Community College in Paramus, NJ, where he teaches human anatomy and physiology as well as microbiology.  He received his bachelor's degree in biology from Fairleigh Dickinson University and his master's degree in science education from Montclair State College.  He is a member of many professional organizations, such as the Human Anatomy and Physiology Society (HAPS), the American Society of Microbiology (ASM), American Association for the Advancement of Science (AAAS), National Education Association (NEA), and the Metropolitan Association of College and University Biologists (MACUB).

Above all, Jerry is devoted to his students and their aspirations.  In recognition of this commitment, Jerry was the recipient of MACUB's 1992 President's Memorial Award.  In 1996, he received a National Institute for Staff and Organizational Development (NISOD) excellence award from the University of Texas and was selected to represent Bergen Community College in a campaign to increase awareness of the contributions of community colleges to higher education.  Jerry is also the author of several best-selling science textbooks and laboratory manuals, a calling that often requires an additional 40 hours per week beyond his teaching responsibilities.

Bryan Derrickson is Professor of Biology at Valencia Community College in Orlando, Florida, where he teaches human anatomy and physiology as well as general biology and human sexuality. He received his bachelor's degree in biology from Morehouse College and his Ph.D. in Cell Biology from Duke University. Bryan's study at Duke was in the Physiology Division within the Department of Cell Biology, so while his degree is in Cell Biology his training focused on physiology. At Valencia, he frequently serves on faculty hiring committees. He has served as a member of the Faculty Senate, which is the governing body of the college, and as a member of the Faculty Academy Committee (now called the Teaching and Learning Academy), which sets the standards for the acquisition of tenure by faculty members. Nationally, he is a member of the Human Anatomy and Physiology Society (HAPS) and the National Association of Biology Teachers (NABT).

Bryan has always wanted to teach. Inspired by several biology professors while in college, he decided to pursue physiology with an eye to teaching at the college level. He is completely dedicated to the success of his students. He particularly enjoys the challenges of his diverse student population, in terms of their age, ethnicity, and academic ability, and finds being able to reach all of them, despite their differences, a rewarding experience. His students continually recognize Bryan's efforts and care by nominating him for a campus award known as the "Valencia Professor Who Makes Valencia A Better Place To Start." Bryan has received this award three times in the past 5 years.

1. Principles of Anatomy and Physiology.

2. Principles of Anatomy and Physiology, Atlas and Registration Card

3. Principles of Anatomy and Physiology, Atlas and Registration Card

4. Principles of Anatomy and Physiology

Shipping: US$ 8.68
From United Kingdom to U.S.A.
Destination, rates & speeds