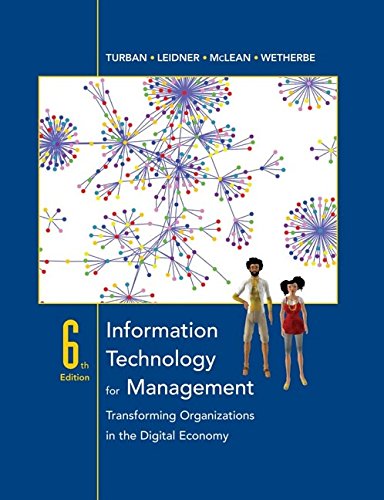 Social networks are transforming how people communicate, work, and play. This comprehensive new edition highlights this new technology and scores of others that are changing how organizations operate and compete in the current global environment.

The cover depicts two examples of social network. The larger image is a visualization of the trust relationships in a web–based social network. The smaller figures are default avatars from Second Life, a multi–layered, 3D virtual world that is imagined, created, and owned by its residents.

For more information on the trust network, visit trust.mindswap.org

Dr. Efraim Turban obtained his M.B.A. and Ph.D. degrees from the University of California, Berkeley. His industry experience includes eight years as an industrial engineer, three of which were spent at General Electric Transformers Plant in Oakland, California. He also has extensive consulting experience to small and large corporations as well as to governments. In his over thirty years of teaching, Professor Turban has served as Chaired Professor at Eastern Illinois University, and as Visiting Professor at City University of Hong Kong, Nanyang Technological University in Singapore, and University of Science and technology in Hong Kong. He has also taught at UCLA, USC, Simon Fraser University, Lehigh University, California State University, Long Beach, and Florida International University.

Professor Turban is a Visiting Scholar with the Pacific Institute for Information Systems Management College of Business University of Hawaii at Manoa, His major research interests include electronic commerce, strategy, and implementation.

Dr. Dorothy Leidner is the Randall W. and Sandra Ferguson Professor of Information Systems and Director of the Center for Knowledge management at Baylor University. Prior to rejoining the Baylor faculty, she was associate professor at INSEAD and at Texas Christian University. She has also been visiting Professor at Instituto tecnologico y des Estudios Superiores de Monterrey, Mexico, at the Institut d′ Administration Des Entreprises at the Universite de caen, Frande, and at Southern Methodist University. Dr. Leidner received her Ph.D. in Information Systems from the University of Texas at Austin, where she also obtained her M.B.A. and her B.A. in Plan II. Dr. Leidner′s research has been published in a variety of journals, such as MIS Quarterly, Information Systems, Decision Sciences, Decision Support Systems, and Organization Science. She has received best–paper awards in 1993 from the Hawaii International Conference on Systems Sciences, in 1995 from MIS Quarterly, and in 1999 from the Academy of Management. She is currently serving as co–editor of the Journal Data Base for Advances in Information Systems. She is also an associate editor for MIS Quarterly and a senior editor for the Journal of Strategic Information Systems, and is on the editorial board of MISQ Executive.

Dr. Ephraim R. McLean earned his Bachelor of Mechanical Engineering degree from Cornell University in 1958. After brief service in the U.S. Army Ordinance Corps, he worked for the Procter & Gamble Co. for seven years, first in manufacturing management and later as a computer systems analyst. In 1965, he left P&G and entered the Sloan School of Management at the Massachusetts Institute of Technology, obtaining his master′s degree in 1967 and his doctorate in 1970.

While at M.I.T., he began an interest in the application of computer technology to medicine, working on his dissertation at the Lacey Clinic in Boston. While there, he was instrumental in developing the Lahey Clinic Automated Medical History System. During the Same period, he served as an instructor at M.I.T and also assisted in the preparation of the books The Impact of Computers on Management (MIT Press, 1967), the Impact of Computes on Collective Bargaining (MIT Press, 1969), and Computers in Knowledge–Based Fields (MIT Press 1970),. While at M.I.T., he was elected to Sigma XI, the scientific research society.

Dr. McLean left .I.T. and joined the faculty of the Anderson Graduate School of Management at The University of California, Los Angeles (UCLA) in winter 1970. He was the founding Director of the Information Systems research Program and the first Chairman of the Information Systems ar4ea, both within the Anderson Graduate School of Management. In fall 1987, he was named to the George E. Smith Eminent Scholar′s Chair in the Robinson College of Business at Georgia State University in Atlanta; in 2002, was appointed Regent′s Professor in the University System of Georgia.

Dr. James C. Wetherbe is Stevenson Chair of Information Technology at Texas Tech University as well as Professor of MIS at the University of Minnesota where he directed the MIS research Center of 20 years. he is internationally known as a dynamic and entertaining speaker, author, and leading authority on the use of computers and information systems to improve organizational performance and competitiveness. He is particularly appreciated for his ability to explain complex technology in straightforward, practical terms that can be strategically applied by both executives and general management.

He has served four times on the national executive Council of the Society for Information Management (SIM). In 1980, he co–chaired the organizing committee for the International Conference on Information Systems (ICIS) and was Conferences Co–chairman in 1981 in Cambridge, MA; Conference Chairman in 1986 in San Diego, CA; and Conference Co–Chairman in 1997 in Atlanta, CA. He is currently the Executive Director of the ICIS and of the Association for Information Systems (AIS) of which he was one of the founding members. In 1999, he was named a fellow of the AIS, one of the first in the world so honored. In 2003, he was named IS Educator of the Year by the Special Interest Group on Education of the Association for Information technology Professionals (AITP).

Dr. Wetherbe is the author of 18 highly regarded books and is quoted often in leading business and information systems journals. He has also authored over 200 top dozen information technology consultants, and is the first recipient of the MIS Quarterly Distinguished Scholar Award. He has also served on the Faculties of the University of Memphis, where he was Fed Ex Professor and Director of the Center for Cycle Time Research, and the University of Houston.

1. Information Technology for Management: Transforming Organizations in the Digital Economy

2. Information Technology for Management: Transforming Organizations in the Digital Economy

Book Description Wiley. Hardcover. Condition: As New. No Jacket. An apparently unread copy in perfect condition. Dust cover is intact; pages are clean and are not marred by notes or folds of any kind. At ThriftBooks, our motto is: Read More, Spend Less. Seller Inventory # G0471787124I2N00

4. Information Technology for Management: Transforming Organizations in the Digital Economy

Book Description Hardback. Condition: Very Good. The book has been read, but is in excellent condition. Pages are intact and not marred by notes or highlighting. The spine remains undamaged. Seller Inventory # GOR003053859

Shipping: US$ 9.31
From United Kingdom to U.S.A.
Destination, rates & speeds

5. Information Technology for Management: Transforming Organizations in the Digital Economy

8. Information Technology for Management: Transforming Organizations in the Digital Economy

Shipping: US$ 18.64
From United Kingdom to U.S.A.
Destination, rates & speeds

9. Information Technology for Management: Transforming Organizations in the Digital Economy

Book Description John Wiley and Sons, 2008. Condition: Good. This is an ex-library book and may have the usual library/used-book markings inside.This book has hardback covers. In good all round condition. No dust jacket. Please note the Image in this listing is a stock photo and may not match the covers of the actual item,1450grams, ISBN:9780471787129. Seller Inventory # 8232234