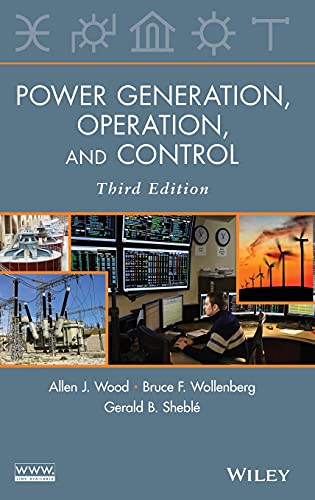 In this eagerly awaited new edition, Power Generation, Operation, and Control continues to provide engineers and academics with a complete picture of the techniques used in modern power system operation. Long recognized as the standard reference in the field, the book has been thoroughly updated to reflect the enormous changes that have taken place in the electric power industry since the Second Edition was published seventeen years ago.

With an emphasis on both the engineering and economic aspects of energy management, the Third Edition introduces central "terminal" characteristics for thermal and hydroelectric power generation systems, along with new optimization techniques for tackling real-world operating problems. Readers will find a range of algorithms and methods for performing integrated economic, network, and generating system analysis, as well as modern methods for power system analysis, operation, and control. Special features include:

ALLEN J. WOOD joined Power Technologies, Inc., in 1969 as a Principal Engineer and Director. He was a Life Fellow of IEEE and served as an adjunct professor in the Electric Power Engineering graduate program at Rensselaer Polytechnic Institute. Dr. Wood passed away in 2011.

BRUCE F. WOLLENBERG joined the University of Minnesota in 1989 and made original contributions to the understanding of electric power market structures. He is a Life Fellow of the IEEE and a member of the National Academy of Engineering.

“Without a doubt, this book makes admirable progress in integrating the ­traditional with the new, and, as such, it is a worthy addition to professional libraries. It is a valuable text for a one- or two-course sequence in a graduate curriculum in power systems. Reasonable resource support for both student and instructor is available through the publisher.” (IEEE, 1 July 2014)

Shipping: US$ 5.13
From United Kingdom to U.S.A.
Destination, rates & speeds

Shipping: US$ 34.22
From United Kingdom to U.S.A.
Destination, rates & speeds