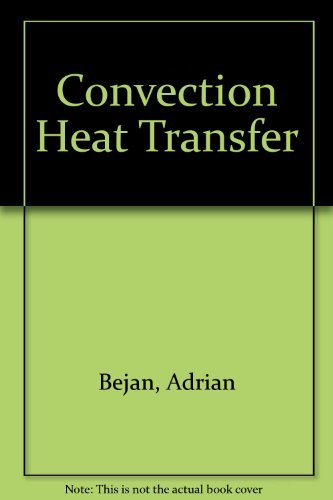 Emphasizing the integration of mathematical expressions with clear physical associations, this challenging graduate-level textbook on convective heat and mass transfer reviews the laws of thermodynamics and fluid motions, behavior of laminar and turbulent flows in a variety of conditions, natural free convection in space, and flows through porous media.

An inspiring and unconventional engineering text on the frontiers of science, the first edition of Convection Heat Transfer quickly established itself as a premier professional reference, one that offered an entirely new and invigorating approach to research and teaching. Updated and revised to reflect the field’s latest research and technical innovations, the Second Edition is an authoritative practical reference and basic graduate-level text to convection heat transfer. Like its predecessor, the new edition balances traditionally rival corners of convection teaching and research, such as forced and natural convection, laminar and turbulent flows, fluids and fluid-saturated porous media, as well as theory and empiricism. Yet the new edition also focuses on the growing concerns in energy and ecology, with an emphasis on man’s enhanced role in living equitably with nature. The book’s unique topical breadth and arrangement, the first in a text on heat convection, reflect today’s environmental realities:

The Second Edition also includes such important additions as convection with change of phase (condensation, boiling, and melting), cooling of electronic packages by forced and natural convection, lubrication by contact melting, and several examples of conjugate heat transfer. The new edition also includes an exposition of the latest analytical techniques and new heat transfer correlations; an expanded discussion of laminar and, especially, turbulent forced convection, as well as the latest applications of the buckling theory of turbulent flow. Designed as an optimal study tool, the newest edition features end-of-chapter questions that are natural extensions of the research topics debated in the text and which serve to reinforce basic conceptual material. Throughout, the text stresses physical insight and problem solving, and invites the student to question authority. The Second Edition’s revised format, including numbered sections and an introductory symbols list, make the book especially accessible for first-time users. Numerous formulas, tables, charts, and appendixes, useful in engineering design work, have been added to each chapter. Skillfully balancing theory with real engineering practice as well as cutting-edge techniques with the latest research, the Second Edition of Convection Heat Transfer is an essential reference for professionals and students interested in successfully meeting the newer challenges of the science today. From the Back Cover:

A revised edition of the industry classic, Convection Heat Transfer, this Third Edition chronicles how the field of heat transfer has grown and prospered over the last two decades. Students will find this new edition more accessible, while not sacrificing its thorough treatment of the most up-to-date information on current research and applications in the field.

One of the foremost leaders in the field, Adrian Bejan has pioneered and taught many of the methods and practices commonly used in the industry today. He continues this book’s long-standing role as an inspiring, optimal study tool by providing:

Complete with hundreds of informative and original illustrations, Convection Heat Transfer, Third Edition is the most comprehensive and approachable text for students in schools of mechanical engineering.