Items related to Robert Mugabe: A Life of Power and Violence

Chan, Stephen Robert Mugabe: A Life of Power and Violence

Robert Mugabe: A Life of Power and Violence 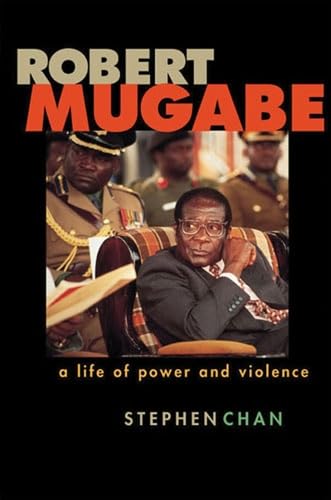 Robert Mugabe was born in 1924, a black man in one of Africa's most defiantly white-dominated nations: Rhodesia. A revolutionary hero who came to prominence as a guerrilla leader in the 1970s, he has been a key player in Southern Africa ever since. For when Rhodesia became Zimbabwe in 1980, Mugabe became the public face of a hopeful experiment in African independence--but the next twenty-two years would tell a different story.
In this evenhanded yet unsparing study, Stephen Chan explains and interprets a freedom fighter turned tyrant, an idealist whose triumph over the forces of racism and colonialism bore bitter fruit. As a chronicler of Mugabe's career, Chan has superb credentials. A firsthand witness to Zimbabwe's struggle for independence and an advisor to the new nation's early post-independence government, he gives us a masterly portrait of Mugabe: his strengths and victories--and, increasingly, his tragic flaws and destructive failures.
The author follows Mugabe from his days as a rebel through his electoral victory, his growing influence in African politics, and his unyielding opposition to apartheid. A teacher for twenty years before he took up arms, he led his country to the highest literacy rate in Africa, at 85 percent, and his avowed socialism promised greater equality of wealth in a new, multiracial Zimbabwe.
But a darker picture emerged early with the savage crushing of the Matabeleland uprising, the ruthless elimination of political opponents, and growing cronyism and corruption that betrayed Zimbabwe's hopes and wrecked its economy. A disastrous intervention in the Congo War, catastrophic drought, and a raging AIDS epidemic have culminated in national crisis--and a beleaguered president determined to hang onto power at all costs in the face of growing unrest.
Chan's tightly argued and rigorous narrative depicts a triumphant nationalist leader who degenerated into a petty despot consumed by hubris and self-righteousness and driven to such desperate measures as seizing white-owned farms, muzzling the press, and unleashing violence on his political opponents. It's a true African tragedy, with a protagonist who came to personify all that he once reviled--at a cost to his country and his continent that will be reckoned for many years to come.
Stephen Chan is Professor of International Relations and Dean of Law and Social Sciences, the School of Oriental and African Studies, the University of London. He advised the early government of Zimbabwe and has published many books on the international relations of Southern Africa.

Stephen Chan (Professor of International Relations and Dean of Law and Social Sciences, School of Oriental and African Studies, University of London)

1. Robert Mugabe: A Life of Power and Violence

2. Robert Mugabe - A Life of Power and Violence

3. Robert Mugabe: A Life of Power and Violence Chan, Stephen