Items related to Incidents of Travel in Yucatan (Volume Two) 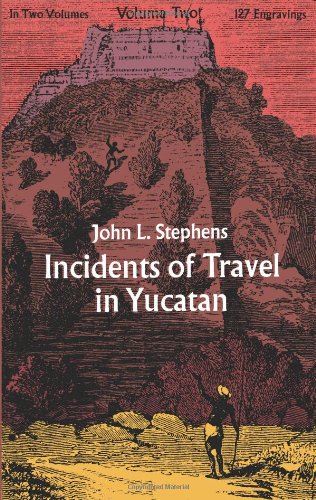 This is Volume 2 of John L. Stephens' "Incidents of Travel in Yucatan," a two-volume work that remains one of the great stories of archaeological discovery, and at the same time one of the few really absorbing books of travel. Before Stephens' expedition to Yucatan in 1841, little was known of that country; the Maya Indian culture, for example, had not been discovered. Stephens found, and described in this work, forty-four Maya sites; his account of these remains is, after more than close to two centuries, still the most authoritative in existence. Important as it is to the world of science, this work is nonetheless a great classic of travel and exploration. Stephens' descriptions of Yucatecan folkways, manners, dress, amusements, ceremonies, etc., are extremely articulate, and the frequent humorous passages are told with all the adroitness of a Mark Twain. Whether he is depicting a feast-day in Merida, the ferocity of a bullfight, the rude pathos of an Indian burial, or his own attempts to start a photography business among the natives, Stephens' prose remains consistently penetrating and alive. Frederick Catherwood's highly exact and realistic drawings, famous in their own right, virtually double the overall appeal of the work.

John Lloyd Stephens was an American explorer whose reports on long-forgotten Mayan ruins in Central America caused a resurgence of popular and scholarly interest in the ancient people.

As director of the Ocean Steam Navigating Company and president of the Panama Railway Company, Stephens (1805-1852) knew a lot about travel, and he wrote about it. His first book, Incidents of Travel in Central America, Chiapas and Yucatan, went through 12 printings and earned its author $15,000 in its first three months, making him one of America's first bestselling writers. Edgar Allen Poe called it "perhaps the most interesting book of travel ever published." This more seasoned and focused account of Stephens's second trip, originally published in 1843, is packed with detailed accounts of travels in newly discovered Mayan ruins and with equally fascinating lithographs by his travel companion, Frederick Catherwood. Through Stephens's eyes, readers see Yucatan villages of 150 years ago, when Indians used cacao beans instead of money in their marketplaces; a Catholic/indigenous hybrid funeral that seems no more barbaric than the crude medical treatments rendered by another of Stephens's travel companions, Dr. Cabot, on their Mayan guides. One of the first to acknowledge that indigenous Americans might have built the great American pyramids and temples, not Egyptians, Greeks or one of the lost tribes of Israel, Stephens voiced a rare, nonjudgmental viewpoint in a time when European cultural elitism was the unquestioned norm. Not just a curiosity for archeology buffs or cultural studies types, this is also an informative, intriguing guide for armchair travelers.
Copyright 1996 Reed Business Information, Inc.