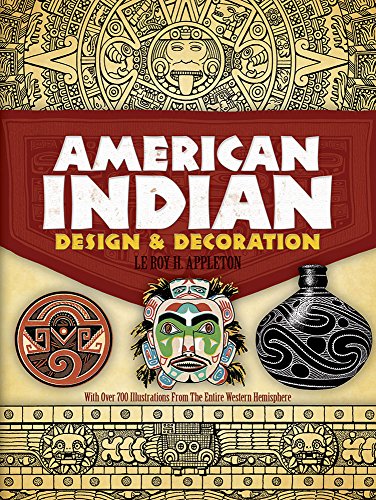 The most original and most powerful design art produced in the Western Hemisphere is also its most indigenous: that of the Indian, in innumerable cultures existing from prehistory to the arrival of the white man, reaching from the Arctic Circle to Tierra del Fuego. It owes, of course, nothing to Europe or the classical Orient. It is tremendous in variety, differing region by region, era by era, often tribe by tribe. It is always vigorously distinctive. This book, 20 years in preparation, shows us that art in all its profuse diversity and in the almost numberless crafts for which the American Indian is famous.
Well over 700 examples, drawn with painstaking care, are shown: representations of flora and fauna, men and gods, earth and sky; symbols of clan and tribe, religion and magic; formal designs from the primal to the highly intricate. They appear in examples of basketry, weaving, pottery, sculpture, painting, lapidary work, masks, drumheads, weapons, apparel, beadwork, goldwork, blankets, ponchos, and many other forms. The arts and crafts of Inca, Tiahuanaco, Chimú, Maya, Axtec, Zapotec, Totonac, Mixtec, Navaho, Zuni, Hopi, Apache, Cherokee, Creek, Winnebago, Dakota, Blackfoot, Nez Percé, Cheyenne, Crow, Sioux, Cochiti, Haida, Bellacoola, and others known and unknown are here.
Each section is preceded by a page of typical motifs of an area, making it easy to isolate the design elements. In addition, the lore and tradition behind the designs are told in a text reproducing the Indians' own stories and songs. Separate indices simplify locating the work of particular tribes and regions.
Craftspeople will find in this book a prolific source of timeless, eternally valid design ideas representing years of research in museums all over the hemisphere; for the graphic artist there is a wealth of material than can be adapted directly to his needs. All those interested in the Americans who preceded us on these continents will find this work unique.

Shipping: US$ 16.41
From United Kingdom to U.S.A.
Destination, rates & speeds