Burnham's Celestial Handbook: An Observer's Guide to the Universe Beyond the Solar System, Vol. 3 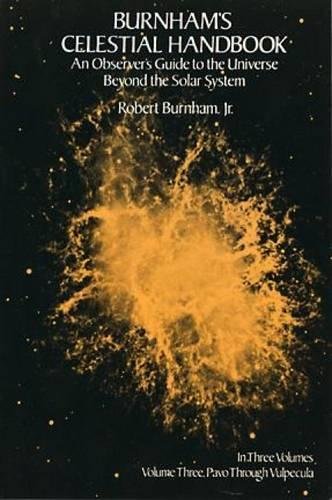 Volume III of a comprehensive three-part guide to celestial objects outside our solar system concludes with listings from Pavo to Vulpecula. While there are many books on stars, there is only one Celestial Handbook. Now completely revised through 1977, this unique and necessary reference is available once again to guide amateur and advanced astronomers in their knowledge and enjoyment of the stars.
After an extensive introduction in Volume I, which gives the beginner enough information to follow about 80 percent of the body of the material, the author gives comprehensive coverage to the thousands of celestial objects outside our solar system that are within the range of telescopes in the two- to twelve-inch range.
The objects are grouped according to the constellations in which they appear. Each constellation is divided into four subject sections: list of double and multiple stars; list of variable stars; list of star clusters, nebulae and galaxies; and descriptive notes. For each object the author gives names, celestial coordinates, classification, and full physical description. These, together with a star atlas, will help you find and identify almost every object of interest.
But the joy of the book is the descriptive notes that follow. They cover history, unusual movements or appearance, and currently accepted explanations of such visible phenomena as white dwarfs, novae and super novae, cepheids, mira-type variables, dark nebulae, gaseous nebulae, eclipsing binary stars, the large Magellanic cloud, the evolution of a star cluster, and hundreds of other topics, many of which are difficult to find in one place. Hundreds of charts and other visual aids are included to help in identification. Over 300 photographs capture the objects and are works of beauty that reflect the enthusiasm that star gazers have for their subject.
Robert Burnham, Jr., who was on the staff of the Lowell Observatory, Flagstaff, Arizona, conceived the idea of The Celestial Handbook decades ago, when he began assembling a notebook of all the major facts published about each celestial object. In its former, privately printed edition, this handbook was acclaimed as one of the most helpful books for astronomers on any level.

1. Burnham's Celestial Handbook: An Observer's Guide to the Universe Beyond the Solar System, Vol. 3

3. Burnham's Celestial Handbook: An Observer's Guide to the Universe Beyond the Solar System, Vol. 3

4. Burnham's Celestial Handbook: An Observer's Guide to the Universe Beyond the Solar System, Vol. 3

5. Burnham's Celestial Handbook: An Observer's Guide to the Universe Beyond the Solar System, Vol. 3