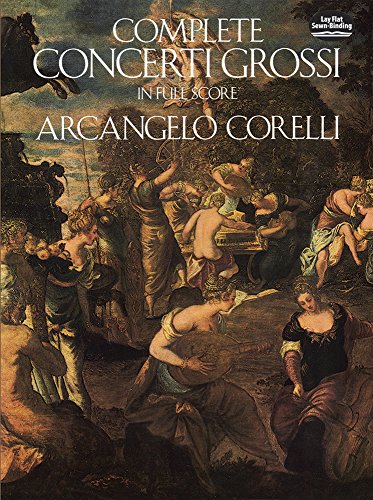 These masterful works by the baroque composer Arcangelo Corelli (1653–1713) are among the earliest created in the concerto grosso form. They radiate a vibrant lyricism and crisp dignity of style that set them clearly apart from works by most earlier composers, who strove primarily for virtuoso brilliance and whimsy. This finely produced yet inexpensive paperback edition meticulously reproduces the scores of all twelve of Corelli's concerti grossi from a famous edition prepared by violinist Joseph Joachim and musicologist Friedrich Chrysander at the end of the nineteenth century.
Corelli's concerti grossi for strings and continuo, most of them written in the last three decades of his life, were not published until 1714, the year following his death. Together with his other works — four sets of trio sonatas and one set of violin sonatas — they won him celebrity in his lifetime, great influence on other composers in the decades after his death, and a fervent admiration from musicians, critics, and audiences that has never declined through the centuries.

Book Description Paperback. Condition: New. Paperback. These masterful works by the baroque composer Arcangelo Corelli (1653-1713) are among the earliest created in the concerto grosso form. They radiate a vibrant lyricism and crisp dignity of.Shipping may be from multiple locations in the US or from the UK, depending on stock availability. 256 pages. 0.603. Seller Inventory # 9780486256061