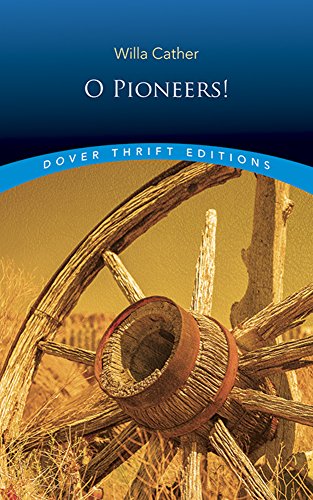 Set on the Nebraska prairie where Willa Cather (1873–1947) grew up, this powerful early novel tells the story of the young Alexandra Bergson, whose dying father leaves her in charge of the family and of the lands they have struggled to farm. In Alexandra's long flight to survive and succeed, O Pioneers! relates an important chapter in the history of the American frontier.
Evoking the harsh grandeur of the prairie, this landmark of American fiction unfurls a saga of love, greed, murder, failed dreams, and hard-won triumph. In the fateful interaction of her characters, Willa Cather compares with keen insight the experiences of Swedish, French, and Bohemian immigrants in the United States. And in her absorbing narrative, she displays the virtuoso storytelling skills that have made her one of the most admired masters of the American novel.

"This beautifully produced book is a joy to read and demonstrates the real pleasures to be derived from meticulous attention to detail and the highest standards of scholarship."—American Literary Scholarship.

"The first of the Cather Scholarly Editions sets a high standard of quality. . . . Text and context reveal the splendor of O Pioneers! and enrich both the experience and study of Cather’s extraordinary prose."—Western American Literature.

Willa Cather said that O Pioneers! was her first authentic novel, "the first time I walked off on my own feet—everything before was half real and half an imitation of writers whom I admired." Cather’s novel of life on the Nebraska frontier established her reputation as a writer of great note and marked a significant turning point in her artistic development. No longer would she let literary convention guide the form of her writing; the materials themselves would dictate the structure.

The paperback edition contains all the text and scholarly apparatus found in the original Willa Cather Scholarly Edition. Edited according to standards set by the Committee for Scholarly Editions of the Modern Language Association, this volume presents the full range of biographical, historical, and textual information on the novel.

Pulitzer Prize-winning author Willa Cather (1873–1947) spent her formative years in Nebraska, which was at that time frontier territory. Her exposure to the region's dramatic environment and intrinsic hardships — along with its diverse population of European-Americans, Native Americans, and immigrants — shaped and informed much of her fiction.

Book Description Dover Publications Inc., United States, 2000. Paperback. Condition: New. New edition. Language: English. Brand new Book. "This early novel is now held to be a very critical and pivotal one in the whole development of the novelist, and this new edition provides . . . a fine printing for readers".-Choice. "A definitive edition of Cather's second novel . . . [that] sets a high standard of quality. . . . David Stouck's comprehensive and cogent historical essay . . . captures not only the life of Cather's text but also provides insight into Cather's imagination and artistic process".-Western American Literature. This is the definitive text of O Pioneers! that appeared in the clothbound Willa Cather Scholarly Edition published by the University of Nebraska Press in 1992. Adhering to the standards set by the Committee for Scholarly Editions of the Modern Language Association, the editors have been faithful in every detail to Cather's intentions as she prepared the manuscript for the first 1913 edition. Printer's errors, spelling of some foreign names, and inconsistencies in dialect and certain stylistic matters, as well as Cather's later corrections, have all been addressed and corrected. Cather's novel of life on the Nebraska frontier was a critical and popular success (over forty printings) and still speaks to readers today. Susan Rosowski and Charles Mignon are professors of English at the University of Nebraska-Lincoln. Kathleen Danker is an assistant professor of English at South Dakota State University. David Stouck is a professor of English at Simon Fraser University. Seller Inventory # AAC9780486277851

Book Description Dover Publications, 1993. Paperback. Condition: New. New edition. Paperback. This powerful early Cather novel, a landmark of American fiction, tells the story of the young Alexandra Bergson, whose dying father leaves her in charge of the family and of the Nebraska .Shipping may be from multiple locations in the US or from the UK, depending on stock availability. 128 pages. 0.104. Seller Inventory # 9780486277851