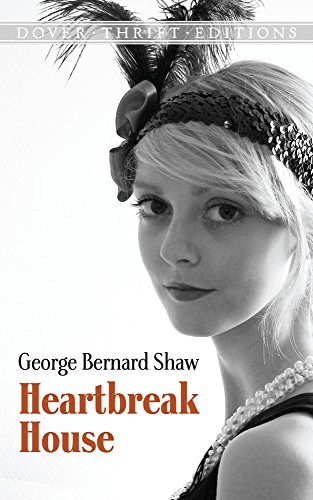 Described by his contemporaries as a "master of impeccable prose," "the great exploder of complacency," and a "showman of ideas," George Bernard Shaw (1856–1950) is today regarded as the most important British comic dramatist since Cosgreve. Heartbreak House, however, is one of Shaw's more somber plays. An allegory that examines apathy, confusion, and lack of purpose as causes of major world problems, the drama features larger-than-life characters who represent evils of the modern world. Initially pessimistic, the play nevertheless ends on an optimistic note.
Written in 1913 and first produced in 1923, Heartbreak House, with its portrayal of a bored and frustrated upper-middle class, is a prime example of Shaw's unconventional and provocative literary style.

In the course of his long and prolific career, George Bernard Shaw (1856–1950) wrote 60 plays, in addition to music and literary criticism. An avid socialist, he regarded his writing as a vehicle for promoting his political and humanitarian views.

Book Description Paperback. Condition: New. Paperback. One of the distinguished comic dramatist's more somber plays, this entertaining allegory examines apathy, confusion, and lack of purpose as causes of major global problems, with larger-tha.Shipping may be from multiple locations in the US or from the UK, depending on stock availability. 117 pages. 0.091. Seller Inventory # 9780486292915