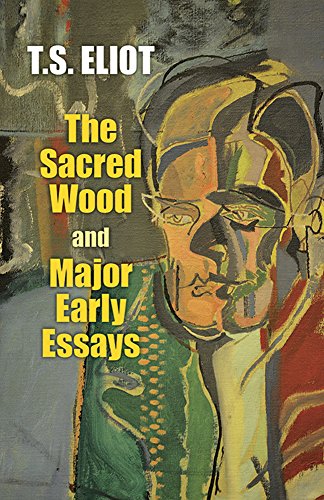 Part of T. S. Eliot's lofty standing among 20th-century poets is directly attributable to his vast knowledge and deep appreciation of his literary predecessors. The importance of Eliot's role as an erudite critic of literary and cultural matters cannot be overstated. With the l920 publication of The Sacred Wood his reputation as a critical force was established. In his first collection of essays, Eliot defines the critic's role as one "to see literature steadily and to see it whole ... not as consecrated by time, but to see the best work of our time and the best work of twenty-five hundred years ago with the same eyes."
Eliot turns his penetrating gaze on such authors as Swinburne, Blake, Dante, and Ben Jonson in this collection of provocative essays. He also considers "Hamlet and His Problems," "The Possibility of Poetic Drama," and most significantly, "Tradition and the Individual Talent."
In addition to all of the essays in The Sacred Wood, this volume includes four features that originally appeared in The Times Literary Supplement: "Homage to John Dryden," "Poets on Poetry," "The Metaphysical Poets," and "Andrew Marvell." Taken together, these pieces offer remarkable insights into Eliot's ideas on poetry and poets, the nature and role of literature and drama, and the function of criticism.

2. The Sacred Wood and Major Early Essays (Paperback or Softback)

Book Description Paperback. Condition: New. Paperback. Part of T. S. Eliot's lofty standing among 20th-century poets is directly attributable to his vast knowledge and deep appreciation of his literary predecessors. The importance of Eliot's r.Shipping may be from multiple locations in the US or from the UK, depending on stock availability. 144 pages. 0.159. Seller Inventory # 9780486299365

6. The Sacred Wood and Major Early Essays (Dover Books on Literature and Drama)

Book Description Dover Publications July 1997, 1997. Paper Back. Condition: New. As Eliot's first collection of essays, The Sacred Wood themes itself in the realm of literary tradition. Surrounded by a host of poets, readers and artists, Eliot maintains it is the individual's work to clothe himself in this collective knowledge and create in accordance with it as part of a community much larger than himself. Literature is whole in its capacity to house both the temporal and the timeless, allowing the past to exist eternally in the present. We might call it a co-creation in which it is not preposterous ''that the past should be altered by the present as much as it is directed by the past.'' Strong words, but well worth the time it might take to digest and incorporate them. We highly recommend. Seller Inventory # 158311

10. The Sacred Wood and Major Early Essays (Dover Books on Literature and Drama)