Items related to As You Like It (Dover Thrift Editions)

William Shakespeare As You Like It (Dover Thrift Editions) 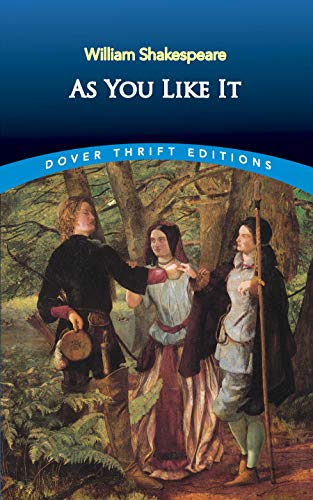 Unjustly deposed by his younger brother, the rightful duke retreats to the Forest of Arden and forms a utopia with his loyal followers while his daughter remains at court as a companion to her cousin. When forbidden romance enters their lives, the girls assume disguises and flee to the forest, where they encounter a magical world of friendly outlaws and wise fools. Both a lighthearted comedy and a deeper exploration of social and literary issues, this play features a memorable cast of characters and some of Shakespeare's finest poetry.

Shakespeare's As You Like It can appear bright or sombre in performance: a feast of language and a delight for comic actors; or a risk-taking exploration of gender roles. This edition offers an account of what makes the play both innocent and dangerous, mapping the complexities of its setting (a no-man's-land related to both France and England) and giving an ample commentary on its language and an analytical account of performance.

Book Description Paperback. Condition: New. Language: English. Brand new Book. This wisely funny comedy, which contains some of Shakespeare's loveliest poetry, contrasts a country's world of envy and rivalry with a forest's world of compassion and harmony. In the Forest of Arden, the banished young heroine, Rosalind, disguised as a gentleman farmer, encounters an extraordinary assemblage of characters, including a fool, a malcontent traveler, her own banished father, and the banished young man she loves. Romantic happiness triumphs, even as we laugh at the excesses of love, at the ways of court and countryside, indeed, at everything, in this masterpiece of comic writing, Seller Inventory # LIO9780486404325

Shipping: US$ 8.88
From United Kingdom to U.S.A.
Destination, rates & speeds