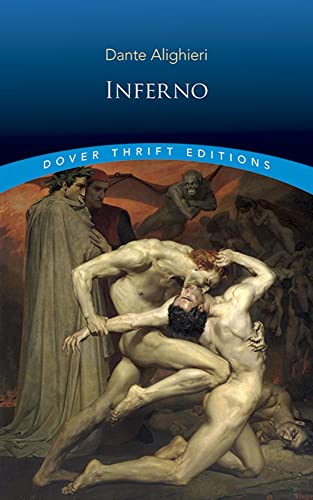 "Here at last that much suffering reader will find Dante's greatness manifest, and not his greatness only, but his grace, his simplicity, and his affection." — William Dean Howells, The Nation
"As a crown to his literary life, Longfellow combines his exquisite scholarship and his poetic skill and experience in the translation of one of the great poems of the world." — Harper's Monthly
Enter the unforgettable world of The Inferno and travel with a pair of poets through nightmare landscapes of eternal damnation to the very core of Hell. The first of the three major canticles in La divina commedia (The Divine Comedy), this fourteenth-century allegorical poem begins Dante's imaginary journey from Hell to Purgatory to Paradise. His encounters with historical and mythological creatures — each symbolic of a particular vice or crime — blend vivid and shocking imagery with graceful lyricism in one of the monumental works of world literature.
This acclaimed translation was rendered by the beloved nineteenth-century poet, Henry Wadsworth Longfellow. A skilled linguist who taught modern languages at Harvard, Longfellow was among the first to make Dante’s visionary poem accessible to American readers.

In 1867, Henry Wadsworth Longfellow completed the first American translation of Inferno and thus introduced Dante’s literary genius to the New World. In the Inferno, the spirit of the classical poet Virgil leads Dante through the nine circles of Hell on the initial stage of his journey toward Heaven. Along the way Dante encounters and describes in vivid detail the various types of sinners in the throes of their eternal torment.

“Opening the book we stand face to face with the poet, and when his voice ceases we may marvel if he has not sung to us in his own Tuscan.” —William Dean Howells, The Nation

Book Description Paperback. Condition: New. Paperback. The first of the 3 canticles in La divina commedia (The Divine Comedy), this 14th-century allegorical poem begins Dante's imaginary journey from Hell to Purgatory to Paradise with his sojo.Shipping may be from multiple locations in the US or from the UK, depending on stock availability. 240 pages. 0.285. Seller Inventory # 9780486442884