Items related to The Poems of Edgar Allan Poe

The Poems of Edgar Allan Poe 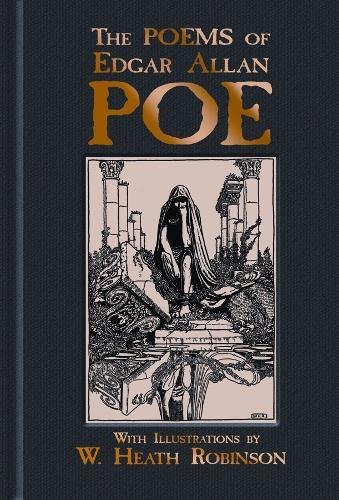 Edgar Allan Poe's dark obsessions and fascination with the supernatural find a perfect match in W. Heath Robinson's powerful and haunting imagery. This magnificently decorated hardcover edition re-creates a 1900 publication from the famed Endymion series of illustrated poets, offering Poe's complete output of poetry in addition to his most important critical essays on the form.

The importance of Edgar Allan Poe to literary history can hardly be exaggerated; his genius and originality, both in terms of language and technique, influenced the French Symbolists of the late nineteenth century and thus changed the course of modern literature. Although chiefly remembered for his short stories, poetry was his first love, and this magnificently decorated edition presents Poe's complete poems in addition to his most important critical essays on poetry.
Featuring such immortal works as "The Raven" "Annabel Lee," and "The Bells," this volume meticulously re-creates the famed 1900 Endymion edition, a series comprising the works of Robert Browning, Keats, and other luminaries. Poe's dark obsessions and fascination with the supernatural find a perfect match in the powerful and haunting imagery of artist W. Heath Robinson, whose headpieces, tailpieces, decorated titles, and other illustrations appear throughout the book.
www.doverpublications.com

The father of the detective novel and an innovator in the genre of science fiction, Edgar Allan Poe (1809–49) made his living as America's first great literary critic. Today he is best remembered for his short stories and poems, haunting works of horror and mystery that remain popular around the world.

1. The Poems of Edgar Allan Poe