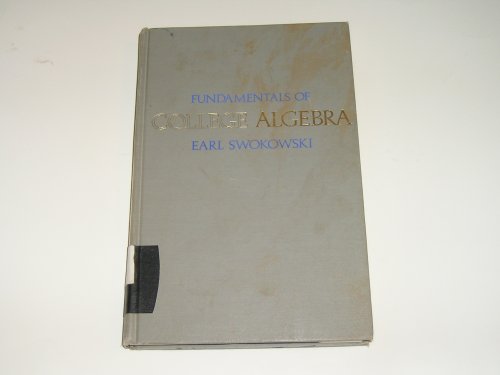 This classic in the series of highly respected Swokowski/Cole mathematics texts retains the elements that have made it so popular with instructors and students alike: it is clearly written, the time-tested exercise sets feature a variety of applications, its exposition is clear, its uncluttered layout is appealing, and the difficulty level of problems is appropriate and consistent. Now this Ninth Edition of Fundamentals of College Algebra has been improved in three important ways. First, discussions have been rewritten to enable students to more easily understand the mathematical concepts presented. Second, exercises have been added that require students to estimate, approximate, interpret a result, write a summary, create a model, explore, or find a generalization. Third, graphing calculators have been incorporated to a greater extent through the addition of examples and exercises as well as the inclusion of a cross-referenced appendix on the use of the TI 82/83. All of this has been accomplished without compromising the mathematical integrity that is the hallmark of this text.

"The clarity of the presentation is wonderful. The examples are well-chosen and to the point. The logical flow of the ideas is beautifully paced and perfectly connected." "Ah the exercises. Such expanse, such variety.... My only problem would be selecting from all this wealth, and, as far as I am concerned, that is a good problem to have."