Items related to Liberty, Equality, and Power: A History of the American...

Liberty, Equality, and Power: A History of the American People, Volume I: To 1877 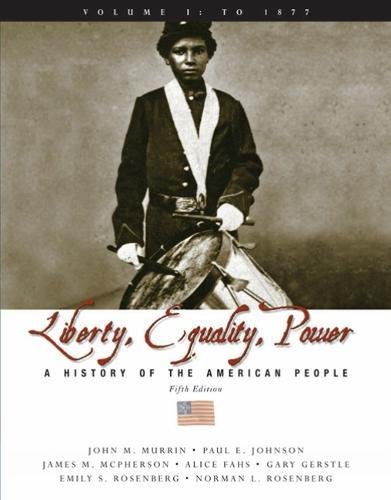 Understanding the past helps us navigate the present and future. When you read this text, you will not only learn about American History, you will be exposed to movies and music that tell the stories of American History in addition to the reading material you expect in a college level history book. A highly respected, balanced, and thoroughly modern approach to US History, LIBERTY, EQUALITY, POWER, uses themes in a unique approach to show how the United States was transformed, in a relatively short time, from a land inhabited by hunter-gatherer and agricultural Native American societies into the most powerful industrial nation on earth. This approach helps you understand not only the impact of the notions of liberty and equality, which are often associated with the American story, but also how dominant and subordinate groups have affected and been affected by the ever-shifting balance of power.

John M. Murrin studies American colonial and revolutionary history and the early republic. He has edited one multivolume series and five books, including two essay collections?COLONIAL AMERICA: ESSAYS IN POLITICS AND SOCIAL DEVELOPMENT, Sixth Edition (2010), and SAINTS AND REVOLUTIONARIES: ESSAYS IN EARLY AMERICAN HISTORY (1984). His own essays cover topics ranging from ethnic tensions, the early history of trial by jury, the emergence of the legal profession, the Salem witch trials, and the political culture of the colonies and the new nation to the rise of professional baseball and college football in the nineteenth century. He served as president of the Society for Historians of the Early American Republic in 1998?1999.

"Compared to the five texts which I have used over the past 15 years, the Murrin text presents the most comprehensive overview of more themes than any of the others."

"It is a much better text [than competing texts]. It operates on a higher learning level and has a greater command of scholarship."

"The narrative for LIBERTY, EQUALITY, POWER is clear, balanced, and very interesting. It's written at a level that survey students can understand and find engaging. In a time when many texts promise balance and diversity, this one actually delivers."

"I really like both the History Through Film and the Musical Links to the Past. Both...are engaging tools for students and also allow instructors another method for bringing the past alive and directly to their students."

1. Liberty, Equality, and Power: A History of the American People, Volume I: To 1877

3. Liberty, Equality, and Power: A History of the American People, Volume I: To 1877

4. LIBERTY, EQUALITY, AND POWER: A