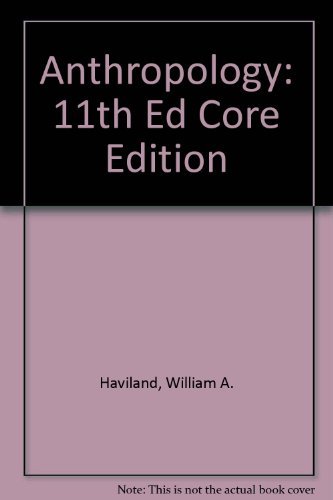 Comprehensive, readable and written for the student, Haviland/Prins/Walwrath/McBride's market-leading text, CULTURAL ANTHROPOLOGY, is a highly relevant, high-quality teaching tool. The narrative voice of the text has been thoroughly internationalized and the "we:they" Western voice has been replaced with an inclusive one that will resonate with both Western and non-Western students and professors. In addition, gender, ethnicity, and stratification concepts and terminologies have been completely overhauled in accordance with contemporary thinking and the narrative streamlined using more fully developed, balanced, and global examples. In CULTURAL ANTHROPOLOGY, the authors present students with examples of "local responses" to challenging globalization issues, designed to provide students with a "cross-cultural survival guide" for living in the diverse, multicultural world of the 21st century. This edition is a truly exciting and unique examination into the field of cultural anthropology, its insights, its relevance, and the continuing role of cultural survival issues.

William A. Haviland is professor emeritus at the University of Vermont, where he founded the Department of Anthropology and taught for 32 years. He holds a PhD in anthropology from the University of Pennsylvania. He has carried out original research in archaeology in Guatemala and Vermont; ethnography in Maine and Vermont; and physical anthropology in Guatemala. This work has been the basis of numerous publications in national and international books and journals, as well as in media intended for the general public. His books include The Original Vermonters, coauthored with Marjorie Power, and a technical monograph on ancient Maya settlement. He also served as consultant for the award-winning telecourse Faces of Culture, and he is co-editor of the series Tikal Reports, published by the University of Pennsylvania Museum of Archaeology and Anthropology. Besides teaching and writing, Dr. Haviland has lectured to many professional and nonprofessional audiences in Canada, Mexico, Lesotho, South Africa, and Spain, as well as in the United States. He served as expert witness for the Missisquoi Abenaki of Vermont in an important court case over aboriginal fishing rights. Dr. Haviland was named University Scholar by the Graduate School of the University of Vermont in 1990; received a Certificate of Appreciation from the Sovereign Republic of the Abenaki Nation of Missisquoi, St. Francis/Sokoki Band in 1996; and was given a Lifetime Achievement Award from the Center for Research on Vermont in 2006. Now retired from teaching, he continues his research, writing, and lecturing from the coast of Maine. He serves as a trustee for the Abbe Museum in Bar Harbor, focused on Maine's Native American history, culture, art, and archaeology. His most recent books are At the Place of the Lobsters and Crabs (2009) and Canoe Indians of Down East Maine (2012).

Book Description Cengage Learning, 2005. Paperback. Condition: Good. Connecting readers with great books since 1972. Used books may not include companion materials, some shelf wear, may contain highlighting/notes, may not include cdrom or access codes. Customer service is our top priority!. Seller Inventory # S_255401521

Book Description Cengage Learning, 2005. Paperback. Condition: Good. Connecting readers with great books since 1972. Used books may not include companion materials, some shelf wear, may contain highlighting/notes, may not include cdrom or access codes. Customer service is our top priority!. Seller Inventory # S_264809418

Book Description CENGAGE Learning. Paperback. Condition: Fair. A readable copy. All pages are intact, and the cover is intact. Pages can include considerable notes-in pen or highlighter-but the notes cannot obscure the text. At ThriftBooks, our motto is: Read More, Spend Less. Seller Inventory # G0495143944I5N00

Book Description Cengage Learning, 2005. Condition: Good. A+ Customer service! Satisfaction Guaranteed! Book is in Used-Good condition. Pages and cover are clean and intact. Used items may not include supplementary materials such as CDs or access codes. May show signs of minor shelf wear and contain limited notes and highlighting. Seller Inventory # 0495143944-2-4