Items related to Bundle: Worlds of Music: An Introduction to the Music... 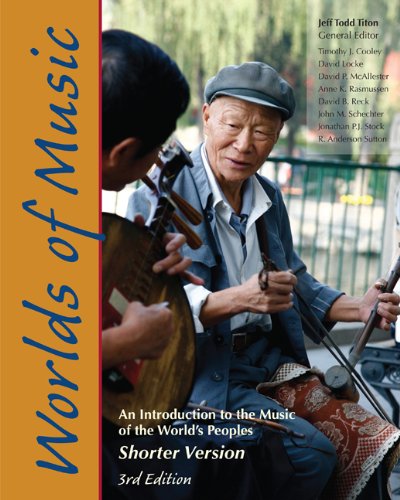 No background or training in music? No problem. This shorter version of WORLDS OF MUSIC: AN INTRODUCTION TO THE MUSIC OF THE WORLD'S PEOPLES is written to make music accessible. Using the case-study approach, the text presents in-depth explorations of music of several cultures from around the world. The authors all ethnomusicologists working in their fields of expertise base their discussions of music-cultures on their own fieldwork and give you a true sense of both the music and culture that created it. The supplementary 3 CD set works hand in hand with the authors' prose providing students with access to a wide range of music-cultures and include authentic recordings from the authors' fieldwork. Leading off is the long-standing jewel in the Worlds of Music crown - James Koetting's magnificent recording of postal workers canceling stamps at the University of Ghana post office. A Western-sounding hymn tune performed against African rhythms, this piece, more that any other, lets you hear contrasting music-cultures.

Jeff Todd Titon is Professor of Music, Emeritus, at Brown University, where he directed the Ph.D. program in ethnomusicology from 1986 to 2013. He received a Ph.D. in American Studies from the University of Minnesota, where he studied ethnomusicology with Alan Kagan, cultural anthropology with Pertti Pelto, and musicology with Johannes Riedel. He founded the ethnomusicology program at Tufts University, where he taught from 1971 to 1986. From 1990 to 1995 he served as the editor of Ethnomusicology, the journal of the Society for Ethnomusicology. He has done ethnographic fieldwork in North America on religious folk music, blues music, and old-time fiddling, with support from the National Endowment for the Arts and the National Endowment for the Humanities. For two years, he was the guitarist in the Lazy Bill Lucas Blues Band, a group that appeared at the 1970 Ann Arbor Blues Festival. He founded and directed an old-time, Appalachian, string-band ethnomusicology ensemble at Tufts (1981-1986) and then at Brown (1986-2013). He is the author or editor of eight books, including Early Downhome Blues, which won the ASCAP-Deems Taylor Award, Give Me This Mountain, Powerhouse for God, and the Oxford Handbook of Applied Ethnomusicology. A documentary photographer and filmmaker as well as author, he is considered a pioneer in applied ethnomusicology, phenomenological ethnography, and ecomusicology. His most recent research may be tracked on his blog at sustainablemusic.blogspot.com.

Timothy J. Cooley is Professor of Ethnomusicology at the University of California, Santa Barbara, where he teaches courses in Polish and American vernacular, and folk, and popular music, as well as music and sports, and music and tourism. He also is affiliated faculty with the university's Global and International Studies Program. He earned a Master's degree in Music History at Northwestern University, and received his Ph.D. in Ethnomusicology at Brown University, where he studied with Jeff Todd Titon. His book MAKING MUSIC IN THE POLISH TATRAS: TOURISTS, ETHNOGRAPHERS, AND MOUNTAIN MUSICIANS won the 2006 Orbis Prize for Polish Studies, awarded by the American Association for the Advancement of Slavic Studies. He enjoys playing Polish mountain fiddle music, American old-time banjo, and singing in choirs. A revised second edition of his book SHADOWS IN THE FIELD: NEW PERSPECTIVES FOR FIELDWORK IN ETHNOMUSICOLOGY, edited with Gregory F. Barz, was published in 2008. Cooley served as the editor of ETHNOMUSICOLOGY, the journal of the Society for Ethnomusicology. His most recent book, SURFING ABOUT MUSIC (2014) considers how surfers from around the world musically express their ideas about surfing and the surfing communities, and how surfing as a sport and lifestyle is represented in popular culture.

David Locke received the Ph.D. in ethnomusicology from Wesleyan University in 1978, where he studied with David McAllester, Mark Slobin, and Gen'ichi Tsuge. At Wesleyan his teachers of traditional African music included Abraham Adzinyah and Freeman Donkor. From 1975 to 1977, he conducted doctoral dissertation fieldwork in Ghana under the supervision of Professor J.H.K. Nketia. In Ghana his teachers and research associates included Godwin Agbeli, Midawo Gideon Foli Alorwoyie, and Abubakari Lunna. He has published numerous books and articles on African music and regularly performs the repertories of music and dance about which he writes. He teaches at Tufts University, where he currently serves as the director of the master's degree program in ethnomusicology and as a faculty advisor in the Tufts-in-Ghana Foreign Study Program. His current projects include an oral history and musical documentation of dance-drumming of the Dagbamba people and an in-depth musical documentation of Agbadza, an idiom of Ewe music, in collaboration with Professor Gideon Foli Alorwoyie. He is active in the Society for Ethnomusicology and has served as the president of its Northeast Chapter.

David P. McAllester received the Ph.D. in anthropology from Columbia University, where he studied with George Herzog. A student of American Indian music since 1938, he undertook fieldwork among the Comanches, Hopis, Apaches, Navajos, Penobscots, and Passamaquoddies. He was the author of such classic works in ethnomusicology as Peyote Music, Enemy Way Music, Myth of the Great Star Chant, and Navajo Blessingway Singer (with coauthor Charlotte Frisbie). He was one of the founders of the Society for Ethnomusicology, and he served as its president and the editor of its journal, Ethnomusicology. Professor Emeritus of Anthropology and Music at Wesleyan University, he passed away in 2006.

Anne K. Rasmussen is Professor of Music and Ethnomusicology and the Bickers Professor of Middle Eastern Studies at the College of William and Mary, where she also directs the Middle Eastern Music Ensemble. Her research interests include music of the Arab and Islamic world; music and multiculturalism in the United States; music patronage and politics; issues of orientalism, nationalism, and gender in music; fieldwork; music performance; and the ethnographic method. Rasmussen received a Ph.D. in ethnomusicology from the University of California, Los Angeles, where she studied with A. J. Racy, Timothy Rice, and Nazir Jairazbhoy. Gerard Behague and Scott Marcus are also among her influential teachers. Rasmussen is author of Women, the Recited Qur'an, and Islamic Music in Indonesia (2010); coeditor with David Harnish of Divine Inspirations: Music and Islam in Indonesia (2011), coeditor with Kip Lornell of The Music of Multicultural America (1997, 2015); and editor of a special issue of the world of music on "The Music of Oman" (2012). She is the author of articles and book chapters in numerous publications and has produced four CD compact disc recordings. Winner of the Jaap Kunst Prize for best article in published in 2000, she also received the Merriam Prize honorable mention for her 2010 book from the Society for Ethnomusicology (SEM). Rasmussen has served that society twice as a board member and was elected SEM president in 2014.