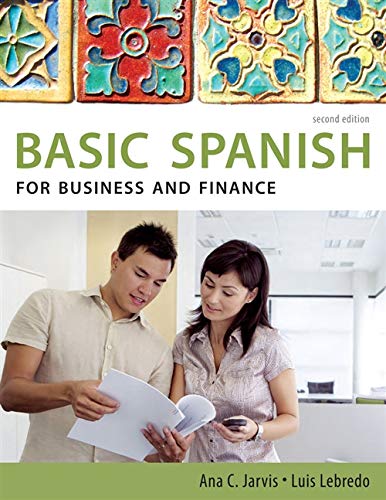 As a key component of The Basic Spanish Series, BASIC SPANISH FOR BUSINESS AND FINANCE, 2E is a communication manual designed to serve those in the world of business who seek basic conversational skills in Spanish. Written for use in two-semester or three-quarter courses, it presents typical everyday situations that business and accounting students, pre-professionals, and professionals may encounter at their workplace, on business travel, or while communicating with business partners abroad. BASIC SPANISH FOR BUSINESS AND FINANCE, 2E introduces essential business vocabulary and notas culturales written from a cross-cultural perspective. It provides students with opportunities to apply, in a wide variety of practical contexts, the grammatical structures presented in the corresponding lessons of the Basic Spanish core text. The second edition of BASIC SPANISH FOR BUSINESS AND FINANCE has several new features: a new trivia feature that gives students interesting facts related to the chapter theme; a new advanced translation section in the Repaso selftest sections and a brand new chapter 20.

Ana C. Jarvis, a native of Paraguay, was born in Asuncion and attended school in Buenos Aires, Argentina. She received her Ph.D. in Spanish from the University of California, Riverside, in 1973. Dr. Jarvis retired from Chandler-Gilbert Community College after a long and distinguished career. Prior to CGCC, she taught at Mesa Community College; the University of California, Riverside; San Bernardino Valley College; Brigham Young University; and Riverside City College. In addition to authoring numerous Spanish textbooks, she has published several short stories in Spanish. In 1988, she was chosen as "Faculty Member of the Year" at Chandler-Gilbert Community College.

Raquel Lebredo was born in Camaguey, Cuba. She attended school in Havana and later enrolled at the University of Havana, where she received a Ph.D. in Education. She was subsequently employed as an elementary school principal, and taught literature and language at a preparatory school in Havana. She moved to the United States after living in Spain for a period of time. Dr. Lebredo was awarded a Ph.D. in Spanish from the University of California, Riverside. Since then, she has taught Spanish at Claremont Graduate School, Crafton Hills College, the University of Redlands, and California Baptist University, and has authored several Spanish textbooks. In 1985, she was chosen as "Faculty Member of the Year" by the student body at California Baptist University, and in 1991 she received a YWCA "Women of Achievement" award.

4. SPANISH FOR BUSINESS AND FINANCE