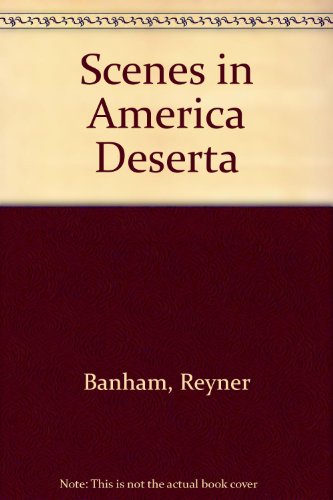 In Scenes in America Deserta, Reyner Banham steps aside from his familiar role as an architectural historian and confesses himself a delighted, intrigued, but puzzled visitor to the arid lands of the American Southwest.

What delights Banham most is visual pleasure, and this book is first and foremost a celebration of the pure visual response of a four-wheeled voyeur. What intrigues him is the works of man - the ancient pueblos and the modern observatories, the fantasies of Las Vegas and the Spanish missions, Frank Lloyd Wright and Paolo Soleri.

What puzzles him is his response as the archetypal British tourist - the discovery that the desert is beautiful in his eyes in a way that no other landscape has ever been. This unsettling discovery sends Banham on a search for the roots of this response. He seeks explanations in the works of writers is various as Gaston Bachelard, Joan Didion, Ray Bradbury early historians and explorers, the American solitary and aesthete John van Dyke (author of the classic The Desert, and Charles Doughty the English Arabist (author of Travels in Arabia Deserta).