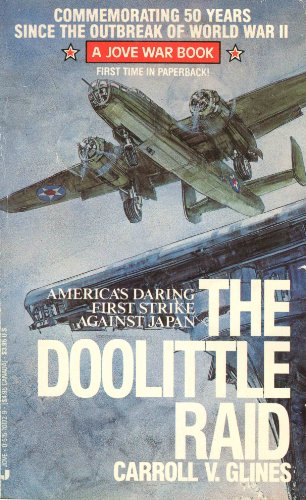 Recaptures the World War II bombing raid over Tokyo under the command of Lt. Col. "Jimmy" Doolittle and the incredible seek-and-destroy mission endured after the bombing

Glines is curator of the Doolittle Military Aviation Library at the University of Texas.

On April 18, 1942, 16 B-25s under the command of Lt. Col. Jimmy Doolittle were launched from the carrier Hornet , flew 650 miles to Japan, dropped their bombs on Tokyo and other targets, and escaped to China and neutral Soviet territory. Although a very small affair in comparison with the B-29 strikes three years later, the Doolittle raid was a severe psychological blow to Japanese military leaders and had far-reaching strategical effects. At the same time, the raid provided an electrifying boost to American morale. Glines, former editor of Professional Pilot magazine, relates this exciting story in full: the bold conception of the mission, the selection of its leader (Doolittle was known as a "master of the calculated risk"), the difficult preparations, the hair-raising "thirty seconds over Tokyo," and the ordeals of those crewmen who fell into Japanese hands in China. Glines also tells the almost unbelievable story of "the last Doolittle raider." Lt. George Barr, convinced that his liberation was an elaborate Japanese trick, was shunted around the U.S. military-medical circuit and ended up in a mental ward. Doolittle himself, by then a general, traced him, rescued him from bureaucratic oblivion, and set him firmly on the road to recovery. Photos.
Copyright 1988 Reed Business Information, Inc.

Book Description Penguin Publishing Group. Mass Market Paperback. Condition: Good. A copy that has been read, but remains in clean condition. All pages are intact, and the cover is intact. The spine may show signs of wear. Pages can include limited notes and highlighting, and the copy can include previous owner inscriptions. At ThriftBooks, our motto is: Read More, Spend Less. Seller Inventory # G0515101729I3N00

Book Description Jove, 1990. Paperback. Condition: GOOD. Has little wear to the cover and pages. Contains some markings such as highlighting and writing. Seller Inventory # 0515101729_abe_gd

Book Description Jove, 1990. Condition: Good. A+ Customer service! Satisfaction Guaranteed! Book is in Used-Good condition. Pages and cover are clean and intact. Used items may not include supplementary materials such as CDs or access codes. May show signs of minor shelf wear and contain limited notes and highlighting. Seller Inventory # 0515101729-2-4

Book Description Jove, 1990. Condition: Good. Shows some signs of wear, and may have some markings on the inside. Seller Inventory # GRP10711575

Book Description Paperback. Condition: Very Good. The book has been read, but is in excellent condition. Pages are intact and not marred by notes or highlighting. The spine remains undamaged. Seller Inventory # GOR003062731