Items related to Longarm and the Range War (Longarm #398)

Longarm and the Range War (Longarm #398) 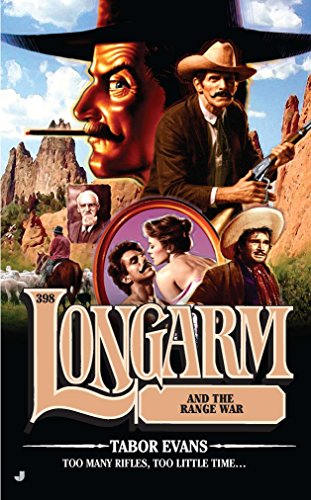 Too many rifles, too little time...

Deputy United States Marshal Custis Long has been dispatched to help out the local law in McConnell County, Wyoming Territory, where a rather unusual range war is about to erupt between Basque sheepmen and Mexican goatherds. The winners will get the grass—and the losers will be buried beneath it.

Longarm’s been called many things in his time, but never a “diplomat.” The lawman quickly learns it’s hard to talk sense into folks when you don’t speak their language. But when Longarm finds out who’s been arming the herders with rifles, he’s not sheepish about letting his six-gun do his talking for him...

Tabor Evans is the author of the long-running Longarm western series, featuring the adventures of Deputy U.S. Marshal Custis Long.

1. Longarm and the Range War

5. Longarm and the Range War

Book Description Mass Market Paperback. Condition: New. Mass Market Paperback. Longarm is sent to head off a range war in Wyoming Territory. The winners will get the grass-and the losers will be buried beneath it. Longarm is sent to head off .Shipping may be from our Sydney, NSW warehouse or from our UK or US warehouse, depending on stock availability. 187 pages. 0.095. Seller Inventory # 9780515150285