Items related to The Dreaming Jewels / The Cosmic Rape / Venus Plus...

The Dreaming Jewels / The Cosmic Rape / Venus Plus X (Omnibus) 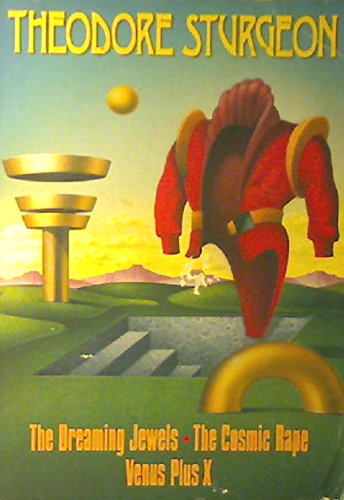 THE DREAMING JEWELS: The story follows an 8-year-old boy named Horton "Horty" Bluett, who runs away from his abusive family, carrying only a smashed jack-in-the-box named Junky. Horty takes refuge among the "strange people" in a traveling circus, disguised as a girl. The owner of the carnival, Pierre Monetre, is a disgraced doctor and scientist with a deep hatred of mankind. Having discovered intelligent extraterrestrial life in the form of crystal-like jewels, Monetre works to unlock the source of their great power and, ultimately, destroy mankind. This book was also published as "Synthetic Man". THE COSMIC RAPE: The Cosmic Rape is also known as To Marry Medusa (1987). Expanded from the novelette "To Marry Medusa". The Medusa, a hive-like being with a consuming appetite to absorb all life in the universe, had come to Earth and taken control of its first human being, a skid-row drunk. Through him it would possess the world... VENUS PLUS X: Charlie Johns has been snatched from his home on 61 North 34th Street and delivered to the strange future world of Ledom. Here, violence is a vague and improbable notion. Technology has triumphed over hunger, overpopulation, pollution, even time and space. But there is a change Charlie finds even more shocking: gender is a thing of the past. Venus Plus X is Theodore Sturgeon's brilliant evocation of a civilization for whom tensions between male and female and the human preoccupation with sex no longer exist. As Charlie Johns explores Ledom and its people, he finds that the human precepts he holds dear are profane in this new world. But has Charlie learned all there is to know about this advanced society? And why are the Ledom so intent on gaining Charlie's approval? Unsettling, compelling, and no less than visionary, here is science fiction at its boldest: a novel whose wisdom and lyricism make it one of the most original and insightful speculations on gender ever produced.

1. The Dreaming Jewels / The Cosmic Rape / Venus Plus X (Omnibus)