Items related to Beyond Uhura 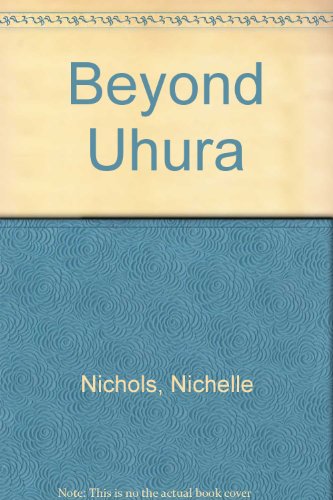 The first African-American woman to have a major, continuing television role tells the inside story of Star Trek and its creator--her onetime lover and lifelong friend--and her struggle to overcome racism and bias against women. 100,000 first printing.

One of the first black women to star in a television series (``Star Trek'') provides a valuable commentary on racism in the business, along with numerous sugarcoated stories about friends, fans, and family. Growing up in Robbins, a black-populated and black-governed town just outside of Chicago, Nichols began her singing and dancing career at the age of 14, touring nightclubs for many years. Nichols met Gene Roddenberry, later the producer of ``Star Trek,'' in 1963 when she was cast in an episode of one of his early television series. Her friendship with the married Roddenberry quickly turned into an affair. Nichols ended it when she discovered he was seeing someone else, although by her account, Roddenberry never quite forgave her for walking away. Nichols faced numerous racial and sexist barriers throughout her career, including conflict with the stuffed shirts of NBC around her role in ``Star Trek.'' Only after Nichols agreed to sign the contract did NBC executives learn that Roddenberry intended to hire a black woman as fourth in command on the Enterprise. They refused to honor the contract, but Roddenberry was free to hire her on a daily basis, which he did throughout the series. Nichols admits having felt humiliated not to be working under the same terms as the rest of the cast. Nichols also reveals the rocky relationship she and the entire cast had with William Shatner. Even though she occasionally offers kind words about Shatner's character and abilities, for the most part he is portrayed as arrogant and bossy. Nichols occasionally takes herself too seriously. Her speeches at ``Star Trek'' conventions often addressed the future of the space program. By her account, ``often, by the end of my speech, the fans would be crying, and I would be crying. Then we'd all be laughing.'' Nichols's story just doesn't have the expected punch from the woman involved with the first televised interracial kiss. But Trekkers will love the gossip. (40 b&w photos, not seen) (Author tour) -- Copyright ©1994, Kirkus Associates, LP. All rights reserved.

Famous as Star Trek's Lieutenant Uhura, Nichols has lived long and prospered in quite a number of other endeavors besides acting, including singing, several varieties of dancing, songwriting, minority recruitment for NASA, space advocacy, and as an African American role model, wife, mother, daughter, and no-nonsense human being. The granddaughter of a slaveowner's son who married an African American woman more than a century ago and the daughter of a man who faced down one of Al Capone's hit squads, she has personally survived discrimination, family feuds, Hollywood, brushes with both the Mob and rape, and 30 years of the ups and downs of Star Trek (she is a definite partisan of Gene Roddenberry--hardly surprising, perhaps, since they considered marriage). Her frankness on all these matters eliminates any need for a future unauthorized biography. This fascinating and delightful book by and about someone who comes across as fascinating and delightful herself is a vital addition to both Star Trek literature and African American studies. Roland Green