Items related to Marriage Shock : The Transformation Of Women Into Wives

Heyn, Dalma Marriage Shock : The Transformation Of Women Into Wives

Marriage Shock : The Transformation Of Women Into Wives 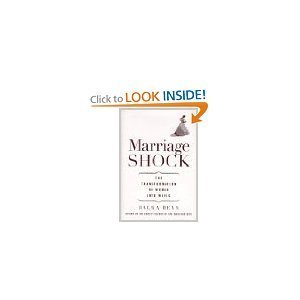 Dalma Heyn offers the revolutionary argument that women leave their marriages not for the reasons commonly believed--boredom, or disharmony with their mate--but because of a subtle trauma that they experience soon after nuptials.
Women in first and second marriages, married at twenty or forty-five, describe their unexpected, often lonely transformation from women into wives and their inability to stop, or even articulate, its occurrence. As one woman says, "Within a year of my marrying, my plans for my own life, my own needs, had disappeared." Heyn argues that the ideal of the Virtuous Wife has taught us that she is the one responsible for the quality of the relationship--that to make a marriage work, women must be sacrificing, accommodating, good. But those are qualities for sainthood, not happiness. In fact, they assure precisely the opposite--distress, resentment, and guilt in both partners.
Elegantly argued and resounding with the voices of women and men, Marriage Shock is a groundbreaking book that will change the way we think about marriage--and about divorce. Heyn's compassionate conclusion is that marriage can be saved only when we stop trying to "fix" wives so they fit into it--and instead fix marriage to embrace and nourish wives.
From the Trade Paperback edition.

Dalma Heyn was formerly the editor of Family Health, the executive editor of McCall's, and a columnist at Mademoiselle, and is now a contributing editor at Self.

A fervent but unconvincing argument that marriage as we know it is bad for women. A logical extension of Heyn's The Erotic Silence of the American Wife (1992), which looked at female adultery, this work is also based largely on anecdotal evidence. A longtime editor and writer for women's magazines (McCall's, Mademoiselle, Self), Heyn draws on a nonscientific sampling of letters and survey responses from readers of McCall's and New Woman as well as interviews with these and other mostly middle-class women. Her thesis is that when they marry, women give up most of what they enjoy about themselves in favor of a more conventional and proper version of themselves. The dutiful and good wife they aspire to be, she claims, is a middle-class invention first described fully in conduct books of the 18th and 19th centuries. Marriage shock, says Heyn, marks the moment of experiencing this split between what the woman is and what culture tells her she should be. That married women have a higher rate of depression than single women or married men is no accident, the author contends, nor is the fact that today most divorces are initiated by women. Excerpts from her interviews with various married women illustrate what Heyn sees as the suppression of desire and the absence of an honest relationship in marriage. Deception, guilt, and unhappiness seem to be the earmarks of modern marriage. Heyn's answer to this crisis? Revolutionize marriage. Overthrow those old-fashioned ideas about what a wife is supposed to be. Imagine marriage based on a new standard of sexual conduct in which women's desires are acknowledged as real. Think of pleasure, not self-improvement, of sexuality, not self-sacrifice. The kind of ``expert'' analysis of relationships that abounds in women's magazines, this all sounds as though it was conceived at least a generation ago. (Author tour) -- Copyright ©1997, Kirkus Associates, LP. All rights reserved.